Vidya Balan: It felt really special to be on stage with Amitabh Bachchan 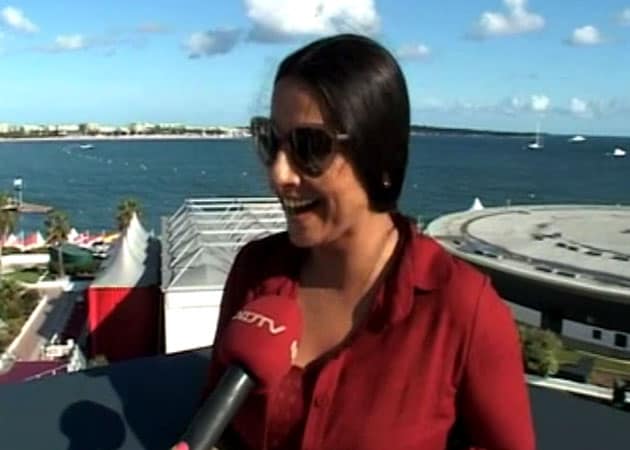 Actress Vidya Balan is on this year's Cannes jury and is fully conscious of the "august" company she is in.

Actress Vidya Balan is on this year's Cannes jury and is fully conscious of the "august" company she is in.
At Cannes, Vidya told NDTV's Noopur Tiwari: "It's extremely exciting and invigorating to be on the same jury as Spielberg, Ang Lee and others. It's going to be a great learning experience for me. It's also a very proud moment for me as an individual, as an actor I feel proud that I've been invited to be on such an august jury. But also because Cannes is celebrating Indian cinema in its 100th year and it's India shining all the way." Vidya Balan to holiday in France with husband?
Vidya also hailed Cannes for bringing together diverse film narratives. She said: "The very fact that we have a large number of Indian films being shown at Cannes this is year is proof of the fact that there are no barriers when it comes to good cinema. Language is never a barrier, nationality is never a barrier, your style of filmmaking is never a barrier. We are back home celebrating Indianness in its full glory unapologetically. Which is why people are looking at us and saying, wow. There is no formula anymore which is very refreshing which is why I think more and more and more people in the world are going to start enjoying Indian cinema." Cannes 2013: Vidya Balan blows a French kiss in Sabyasachi
Desi girl Vidya said she had received many appreciative French comments about her Sabyasachi outfits at Cannes, adding that she was just doing what came most naturally to her: "I wear Indian clothes all the time, even back home. I love Indian clothes because the complement one's femininity beautifully and I love feminine clothing. I didn't see reason to do anything differently here, because I'm here representing Indian cinema and we're celebrating Indian cinema's 100th anniversary." Cannes 2013: Amitabh Bachchan, Vidya Balan open Cannes with a Bollywood bang
And she saved her highest praise for Amitabh Bachchan, who opened the festival with a speech in Hindia. Vidya said: "When I saw Mr Bachchan on stage, I choked. I grew up watching Amitabh Bachchan's films and my niece and nephew who are 21 months old, they know Amitabh Bachchan. Indian cinema and Amitabh Bachchan are synonymous with each other. And when he spoke in Hindi, it was just such a proud moment. Personally, for me to have shared the stage with him and on an international platform where the talk is about India celebrating 100 glorious years, it felt really special. These are the times when you have to pinch yourself and say 'oh my god, this is for real.'"