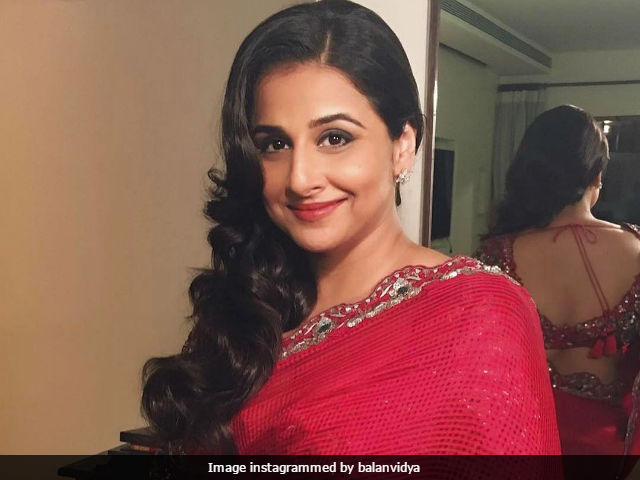 It was a 'sweet start' for Vidya Balan's film Tumhari Sulu, which will go on floors from Sunday. The film's team had organised a pooja ahead of the start of the project which was attended by the mothers of the producers. Vidya Balan shared a picture of her posing with the elderly women and wrote, "#TumhariSulu has got the blessings of these wonderful mothers. I hope we have your best wishes too. (sic)" Mothers of producers Atul Kasbekar, Tanuj Garg, Shanti Sivaram and director Suresh Triveni were present to bless their sons' film Tumhari Sulu. Tumhari Sulu will see actress Vidya Balan in the role of a radio jockey after 11 years. The actress was last seen as an RJ in Lage Raho Munna Bhai.
Here's a look at the picture.


#TumhariSulu has got the blessings of these wonderful mothers... I hope we have your best wishes too . pic.twitter.com/JAcxcmENqN

The idea of bringing their mothers to bless the film was of Atul Kasbekar's, reports Mumbai Mirror. Atul said, "The cosmic powers and blessings of Rama Bhanot saw my last project, Neerja (which was based on her brave-heart daughter), through." Tanuj added, "Mothers are special and we thought it would be wonderful to have their blessings for our labour of love."
Directed by Suresh Triveni, Tumhari Sulu revolves around Sulochana, aka Sulu, who is a housewife and suddenly lands up with a job of a night RJ. Film and stage actor, Manav Kaul, who is best known for Hansal Mehta's Citylights will play Vidya's husband in the film.
Vidya Balan was last in Srijit Mukherjee's Begum Jaan. The much talked about partition drama was a box office turkey. According to film critic Taran Adarsh, Begum Jaan has so far managed to collect only Rs 17.83 crores in India.