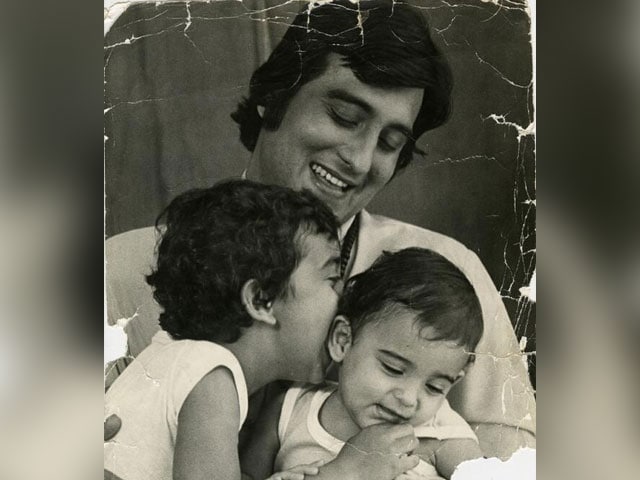 Actor-politician Vinod Khanna's son Rahul tweeted this bittersweet photo of a family holiday on Monday, four days after Mr Khanna died of cancer. Taken decades ago, the picture shows the Khannas frolicking in the sea - dad Vinod swings his two little boys, Rahul and Akshaye, around the waves; a woman in a swimsuit looks out onto the sea behind them but it's not clear if she is Mr Khanna's first wife, Geetanjali. This is how we'd like to remember Vinod Khanna, not by the photo taken in hospital recently that showed him looking shockingly gaunt and frail. Thank you, Rahul, for this wonderful memory.

Vinod Khanna died in a suburban Mumbai hospital last Thursday, after sending almost a month there. He was 70. He was mourned by family, friends and fans. President Pranab Mukherjee and Prime Minister Narendra Modi tweeted messages of condolence, as did many colleagues. His Amar Akbar Anthony co-stars Amitabh Bachchan and Rishi Kapoor attended his funeral on Thursday - both wrote at length on their social media accounts about their memories of Mr Khanna.
Vinod Khanna is probably best remembered as Inspector Amar, one of the three brothers in lost-and-found blockbuster Amar Akbar Anthony. He was also the star of notable films such as Achanak, Mere Apne, Muqaddar Ka Sikander, Hera Pheri and Chandni, the last of which he starred in after a five-year hiatus in which he became a follower of spiritual guru Osho Rajneesh.
Vinod Khanna joined the BJP in 1997 and fought several Lok Sabha elections from Gurdaspur in Punjab. He continued to make film appearances, playing Salman Khan's father in the Dabangg films and Shah Rukh Khan's in 2015 movie Dilwale, his last screen outing.
Both Rahul and Akshaye are actors. Vinod Khanna and second wife Kavita have a son and daughter named Sakshi and Shraddha.