'Vinod Khanna, Thanks For Being My Friend': Rishi Kapoor's Emotional Tributes 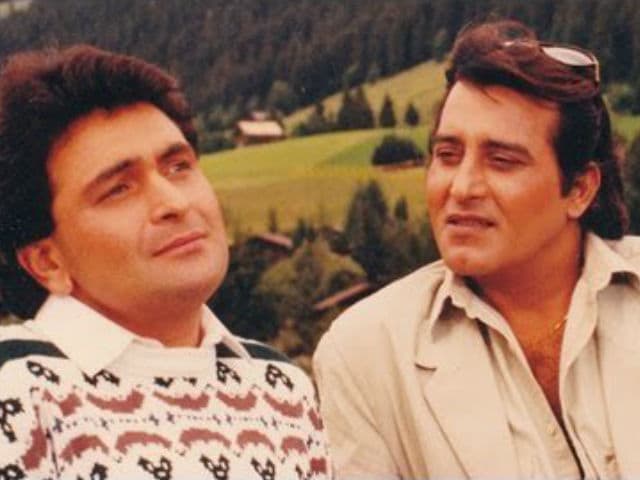 Actor Vinod Khanna's grieving colleague Rishi Kapoor changed his display picture on Twitter to honour him, hours after Mr Khanna died on Thursday. Vinod Khanna, 70, was battling bladder cancer and was admitted to a suburban Mumbai hospital on March 31. Rishi Kapoor also edited the biography section on Twitter to pay tribute to his late friend and it now reads: "Good Bye Vinod Khanna, RIP" (with a tearful emoticon). Mr Kapoor was one of first celebrities to condole Vinod Khanna's death in a series of tweets. He also attended the funeral that was held on Thursday, along with Amitabh Bachchan, his son Abhishek, Jackie Shroff and Randeep Hooda. 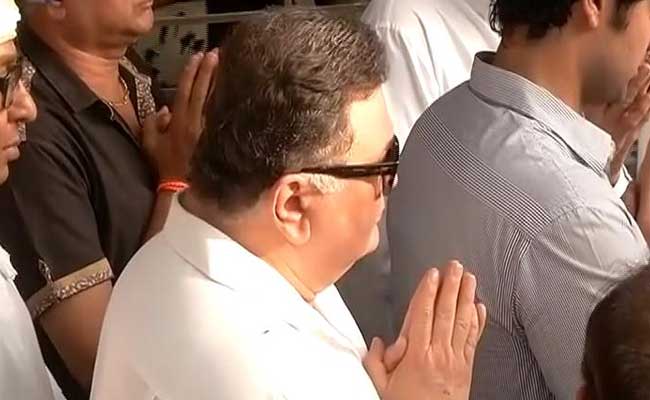 Vinod Khanna and Rishi Kapoor made four movies together - the cult Amar Akbar Anthony from 1977, in which they played Amar and Akbar; 1989's Chandni, which was among Mr Khanna's most notable post-Osho movies; Eena Meena Deeka, which was one of David Dhawan's early 90s offerings; and 2011's Tell Me O Khhuda, which was directed by Mr Khanna's co-star and BJP colleague Hema Malini and starred her daughter Esha Deol in the lead. 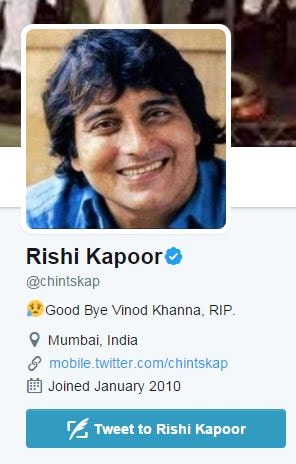 Aside from changing his profile picture, Rishi Kapoor posted a series of tribute tweets for Vinod Khanna. In one, accompanying a film still from Chandni, he wrote, "Last of the actors born in 1946, Peshawar, then British India, leaves us - Vinod Khanna." He also referred to actor Feroz Khan, who was Mr Khanna's co-star of Shankar Shambhu, Qurbani and Dayavan, and who also died on the same day in 2009.
Here are Rishi Kapoor's tweets about Vinod Khanna:


Will miss you Amar. RIP. pic.twitter.com/WC0zt71R4J

Remembering the good times with you,Vinod. Thank you for being my friend. pic.twitter.com/hvZoYeQMEF

Vinod Khanna was admitted to HN Reliance Foundation and Research Centre on March 31. The hospital issued this statement on Thursday: "Veteran actor and Member of Parliament Mr Vinod Khanna, who was admitted to the Sir HN Reliance Foundation Hospital breathed his last at 11.20 am due to advanced bladder carcinoma."
Vinod Khanna, who was also the BJP Member of Parliament from Gurdaspur, made his acting debut in 1968 film Mann Ka Meet and played villains in early films like Purab Aur Paschim and Mera Gaon Mera Desh. He was later cast in leading roles and was best known for his performances in films that featured another, or many, leading actors. Some of Vinod Khanna's finest films are Achanak, Lekin, Parvarish, Mere Apne and Lahu Ke Do Rang. He won a Filmfare Award for Haath Ki Safai.
Vinod Khanna also starred in Salman Khan's Dabangg series and his last onscreen performance was 2015 film Dilwale, co-starring Shah Rukh Khan and Kajol.
Vinod Khanna was married twice and is survived by three sons and a daughter.