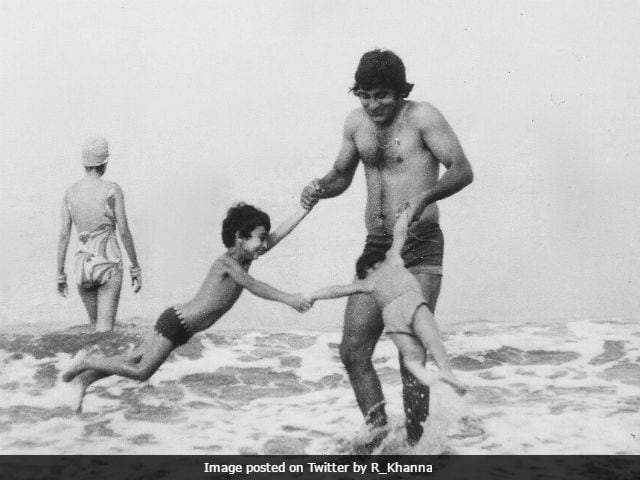 Actor-politician Vinod Khanna's son Rahul posted another throwback picture remembering his late father, who died last week after battling cancer. The black and white picture shared by the 45-year-old actor shows him cradled in the arms of Mr Khanna as he kisses him. In his tweet, Rahul Khanna wrote: "You showed me how to be a gentleman and yet fight to the finish like a warrior. Bye Dad. 1946-2017." On Monday, Rahul had shared a photo of a family vacation on Twitter. In the picture, Mr Khanna was seen swinging his children - Akshaye and Rahul - over the waves.
See the lovely pictures shared by Rahul Khanna

Vinod Khanna, 70, died in a Mumbai hospital on April 27 after battling bladder cancer. He was mourned by family, friends, colleagues and fans. President Pranab Mukherjee and Prime Minister Narendra Modi also posted their condolences on Twitter.
Vinod Khanna is best remembered for his performances in films like Mere Apne, Mera Gaon Mera Desh, Amar Akbar Anthony, Hera Pheri, Achanak and The Burning Train.
In 1982, Vinod Khanna temporarily quit the film industry to follow his spiritual guru Osho Rajneesh. After a break of 5 years, he returned to the big screen with 1987 film Insaaf.
Vinod Khanna joined BJP in 1997. He was the sitting MP from Gurdaspur. After joining politics, Mr Khanna continued to appear in films like Dabangg and Dilwale. His last film was Ek Thi Rani Aisi Bhi, co-starring Hema Malini.
Vinod Khanna is survived by his second wife Kavita and four children - Rahul Khanna and Akshaye Khanna from his first marriage and one son, Saakshi and a daughter, Shraddha from his second marriage.