Viral: When Priyanka Chopra Chose A Sportsman Over Shah Rukh Khan As Her Suitor 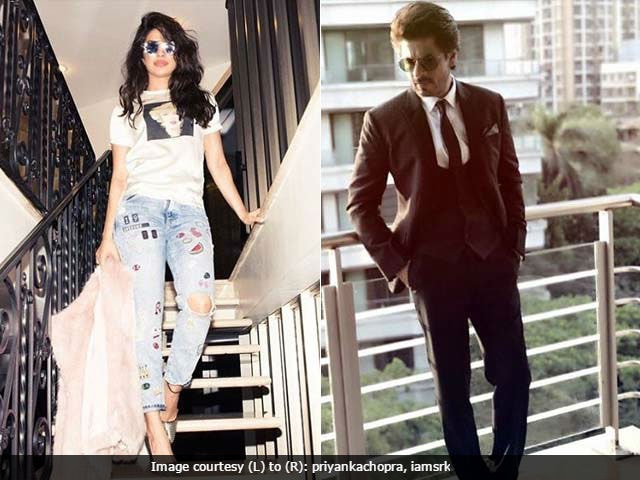 SRK and Priyanka have co-starred in Don and Don 2 (Image courtesy (L) to (R): Priyanka, SRK)

An old video of actress Priyanka Chopra has resurfaced and it is going viral! The throwback video from 2000 shows Priyanka Chopra's first encounter with superstar Shah Rukh Khan. Priyanka Chopra, who contested the 2000 Miss India pageant, was asked a question by Shah Rukh Khan from the judges' panel. In the video, the 51-year-old actor, who said that he goes 'weak' in the presence of beauty, asked a long and complicated question to the Bajirao Mastani actress. "My question is hypothetical. Who would you rather marry? A great Indian sportsman, like Azhar bhai - who would take you all around the world, make your country proud and make you swell with pride. Or an artistic businessman with a difficult name to pronounce like Swaroski, who would bedeck you with jewels and fine necklaces and you would never have to buy a chandelier for your house ever again. Or a Hindi film star like me, who has nothing better to do than to give you complicated multiple-choice questions about a hypothetical wedding like this," asked Shah Rukh Khan.
Well, Priyanka Chopra's answer is not what you would expect. The 34-year-old actress chose to marry an Indian sportsman. "I will take immense pride in my husband who will be a man of strong character if he can bring so much pride to my country," she said.
Watch the video here:

Shah Rukh Khan and Priyanka Chopra have co-starred in films such as - Don (2006) and Don 2 (2011).
Priyanka Chopra is all set to make her Hollywood debut with Baywatch co-starring Dwayne 'The Rock' Johnson and Zac Efron. The film, directed by Seth Gordon, is scheduled to release in theatres on May 26. Priyanka Chopra will be seen portraying the role of the prime antagonist Victoria Leeds in the film.
Shah Rukh Khan, who was last seen in Raees, will next feature in Imtiaz Ali's yet-to-be titled project opposite Anushka Sharma. He will also be seen playing a dwarf in Aanand L Rai's next venture.