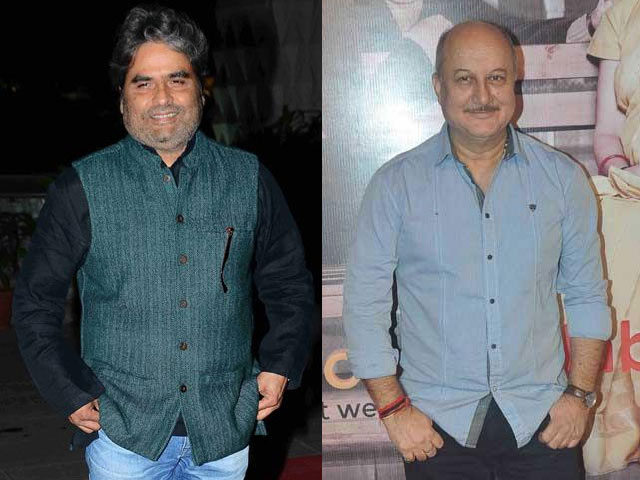 "When was last time Vishal Bhardwaj spoke about the plight of Kashmiri Pandits? He in fact humiliated us by doing dance of devil at our temple," tweeted Anupam Kher

He may have won 5 National Awards for Haider but director Vishal Bhardwaj's war of words continues with actor Anupam Kher, a Kashmiri Pandit who opposed Vishal's film during its release.

Talking to the media after the awards were announced, Mr Bhardwaj dedicated the awards to the Kashmiri Pandits.

"Yes I dedicate my award to them and I feel very sad because they misunderstood my feelings. I have said it before that the tragedy of Kashmiri Pandits is very big," said Mr Bhardwaj.

However Mr Kher, who won the National Award in the Special Jury category for Daddy in 1989 and Maine Gandhi Ko Nahin Mara in 2005, was in no mood to let Vishal Bhardwaj have his say. The veteran actor took to Twitter to put his point across.

While I congratulate Vishal Bhardwaj for National Awards but dedicating them to #KashmiriPandits genocide is such a fraudish thing to do.

When was last time Vishal Bhardwaj spoke about d plight of #KashmiriPandits? He in fact humiliated us by doing dance of devil at our temple.

The so called 'Hindu' centric Govt. gave Haider 5 National Awards which many felt was anti-Hindu & anti Indian Army. This is NOT Talibanism.

My reactions to V Bhardwaj comes from d press con he held after winning National Award & dedicated his award to #KashmiriPandits genocide.

Well, reacting to a press conference is not always a great idea because there was more that Mr Bhardwaj had to say about why he chose not to talk about the Kashmiri Pandits.

"3,00,000 people were thrown out of their houses overnight and were homeless. They were refugees in their own country. It deserved a film long before and by the Kashmiri Pandit filmmakers," he said. "When Mr Anupam Kher got his first chance, he made a film like Om Jai Jagdish, which was not about Kashmiri Pandits. When Vidhu Vinod Chopra got a chance, he made Mission Kashmir where no Kashmiri Pandit was mentioned."

Vishal Bhardwaj was clearly pointing at the fact that he was being blamed for ignoring the Kashmiri Pandits when filmmakers from the community had themselves decided to stay away from the subject.

Over to Anupam Kher now, who, we are sure, will put his point across sooner than later.