Waheeda Rehman: I Was a Stubborn Newcomer, Refused to Change my Name 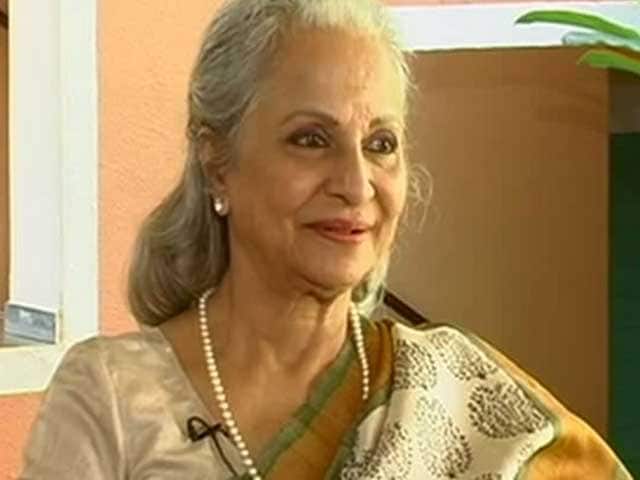 Waheeda Rehman made her Bollywood debut with 1956 film CID

Veteran actress Waheeda Rehman says she was a stubborn newcomer in Bollywood when she made her debut with 1956 film CID.

Ms Rehman, who went on to star in classics like Pyaasa, Kaagaz Ke Phool and Guide, starred opposite Dev Anand in the film, which was produced by her mentor and Pyaasa co-star Guru Dutt.

"I was a very ziddi girl when I was new in the industry. It was so because I knew what I wanted and hence it surprised many that I wanted to work on my own terms and conditions," Ms Rehman said during a session at the ongoing Jaipur Literature Festival.

She was in conversation with Nasreen Munni Kabir and Arshia Sattar during a session titled "Mujhe Jeene Do: conversations with Waheeda Rehman".

The actress recalled how she resisted an attempt by Guru Dutt and CID director Raj Khosla to change her name.

"They quoted examples of Dilip Kumar, Madhubala, Meena Kumari and others who had changed their names. It was like a fashion then. They said 'Waheeda Rehman' was not sexy. But I was adamant since the name was given by my parents and I love it.

Guru Dutt and Raj Khosla were shocked that I had my own expectations even before working with them. They didn't utter a word for three days but finally agreed to retain my original name," she said.

The 76-year-old actress, however, said she found it difficult to work with Guru Dutt as the director would opt for multiple takes.

Narrating an incident that happened during Pyaasa, Ms Rehman said she once saw Guru Dutt, Rahman and Mala Sinha finalising a scene only after 76 takes.

Drawing comparisons between Guru Dutt and Satyajit Ray, with whom she worked in Abhijan, Ms Rehman said, "While Guru Dutt was never content, Satyajit Ray was a clear-headed filmmaker. He would never seek several shots and would often stop you if you do not act according to his expectations.

He used to tell us that he knew what he wanted and how much he wanted. He used to edit his movies himself so he had clear vis ion of the final output."