Was Shah Rukh Khan Serious About Rules For Dating Daughter? Find Out Here

Shah Rukh Khan admitted on NDTV's Spotlight that it was actually 'false bravado' on his part, that he was really serious and that he's not going to be able to enforce any of it for real when Suhana does start dating 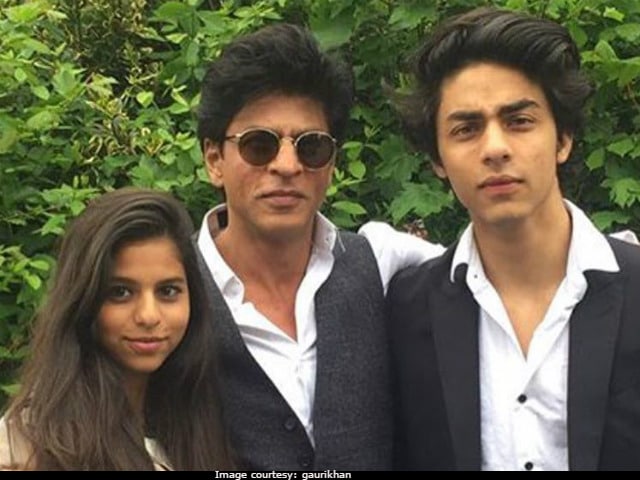 Shah Rukh Khan's fearsome list of seven rules for daughter Suhana's future boyfriends went viral some days ago. The 51-year-old actor had laid out his terms some days ago to Femina: 1. Get a job 2. Understand I don't like you 3. I'm everywhere 4. Get a lawyer 5. She's my princess, not your conquest 6. I don't mind going back to jail 7. Whatever you do to her, I will do to you
And, of course, on Koffee with Karan he had famously threatened to rip the lips off anyone who tried to make time with her. But it turns out there's good news for Suhana and her would be suitors. Shah Rukh Khan admitted on NDTV's Spotlight that it was actually 'false bravado' on his part, that he was really serious and that he's not going to be able to enforce any of it for real when Suhana does start dating. Suhana, 16, is SRK's second child and only daughter. He doesn't appear to have a similar set of rules (full disclosure: that we know of!) for 19-year-old son Aryan's girlfriends - clearly, male hearts don't need to be unbroken.
On NDTV Spotlight, Shah Rukh Khan said, "It's false bravado. I know that when it will come down to it, when my daughter likes somebody, I'll not be able to say anything and just accept it. Before it happens, I thought I'll just put this out, just in case somebody reads it and thinks they should respect me a little more than they can, and take it seriously. But I don't think it's serious at all."
He said also that the only thing he will ask of them is what he asks of himself. "I have a certain way to behave with women, and I would expect and these are only expectations... all the girls will agree that 'My father thinks that but it's not gonna be like this, my guy is so cool.' And I understand that but there's a way I still behave with ladies which is I'm dignified, I have a job, I'm courteous, I'd never ever overrule or overrun the authority that the family would have over the lady, wherever whichever space I may be in. I'd always respect that," he said.
And while potential admirers might be intimidated by SRK he is the first to admit, his kids will have none of it. "Even now sometimes when I go back home with a swag or I say something cool to my children, they have been brought up in such a way that they also don't think I'm much of a star. They also say 'Oh my god, S..R..K..' And I realise that I'm also not SRK, really," the actor said.
Suhana Khan is going to be an actor like her father. Aryan is also studying film in USA. As for the youngest of the Khan children - AbRam is all of three. Speaking about his stardom on Spotlight, SRK said, "I'm shy actually. I am embarrassed with this kind of adulation, if I may call it so. But my little son Abram tells me 'papa, peoples (sic) are waiting outside,' 'bachchas are there papa, let's go and wave out to them,' so I go out. I feel awkward to even come out and wave. I have no idea why they do it. I hope that someday, I can do enough through my work and nothing else, enough for them as an entertainer, to feel I deserve this. I have no idea why so many wonderful people come outside my house and wave and scream and shout."
Video: Watch Shah Rukh Khan On Spotlight