Aamir Khan's Dangal Transformation: How He Got From Fat To Fit

Aamir Khan underwent a drastic change for Dangal. This behind-the-scenes video talks about Aamir's transition into a bulkier Mahavir Singh Phogat and back to a lean version 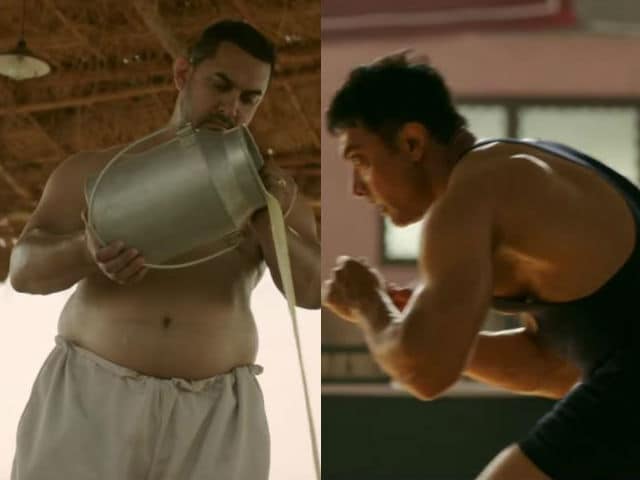 Superstar Aamir Khan's upcoming sports drama Dangal is almost here and before the film hits the screen we take a look at the sweat (quite literally) and the blood Aamir has put in to play the role of wrestler Mahavir Singh Phogat - both the younger and older versions. To play the older part, Aamir put on weight upto 95 kilos which he later reduced to around 70 kilos. The film, directed by Nitesh Tiwari, is the journey of Mahavir Phogat and his daughters Geeta and Babita in the sport of wrestling. Mahavir Phogat famously coached his daughters in his own sport, defying social disapproval and challenging patriarchal norms. His daughters went on to win India's first medals in female wrestling at the 2010 Commonwealth Games.
This behind-the-scenes video, which is trending with the hashtag #AamirKhanFatToFit, talks about Aamir's transition into a bulkier Mahavir Singh Phogat and back to a lean version. Nitesh Tiwari wanted to shoot the part of the film which centered around young Mahavir first and the elder version later. However, Aamir requested him to do vice-versa and his reason will leave you in splits. "If I shot for the elder Mahavir part later then I would've been fat when the film ended and then I wouldn't have had any motivation to lose weight," he said.
Meanwhile, a bodysuit was never Aamir's choice. The 51-year-old actor said that though Nitesh suggested he could use one, Aamir said: "It wouldn't look good with a bodysuit. Fine you'll look bulky with a shirt on but I wouldn't get the feel right." As soon as the filming of the first part ended Aamir told the crew, "I hope you don't see me like this ever again."
Aamir also said that the journey from 97 kilos to 70 kilos wasn't easy. "Initially, I thought I won't be able to do this. I would let go off all negative thoughts and focused on the day." He consulted dietician Dr Nikhil Dhurandhar from USA, who gave him a customized calorie-deficit plan. "Diet has to be proper for weight loss. You can exercise as much as you want but if the diet is not right then you'll never get the desired results."
Aamir trained in wrestling while putting on weight which created a few issues. He said: "I had fun putting on weight but it was also the most uncomfortable. My wrestling training was affected due to this. I was carrying so much weight that I couldn't really move faster. Your breathing also changes when you put on weight. The whole body language also changes - the way you walk, the way you sit, the way you stand up."
Aamir also shared the video saying, "Nitesh Sir sehat ke liye aap toh Haanikarak hain," alluding to the song Haanikaarak Bapu>:

Once 3 Idiots producer Vidhu Vinod Chopra said that only an 'Idiot' like Aamir Khan could make Dangal. "Aamir is a mad man. We call him 'idiot' like you saw in 3 Idiots. So, only he can do this. If you aren't that then you can make a lot of money and leave the world but 'idiots' (people crazy for their work) remain forever," he told PTI in October.
Dangal stars television actress Sakshi Tanwar as Mahavir Phogat's wife while Fatima Sana Shaikh and Sanya Malhotra play wresters Geeta and Babita Phogat. The film releases on December 23. Dangal trailer too shows the result of Aamir Khan's fat to fit journey: