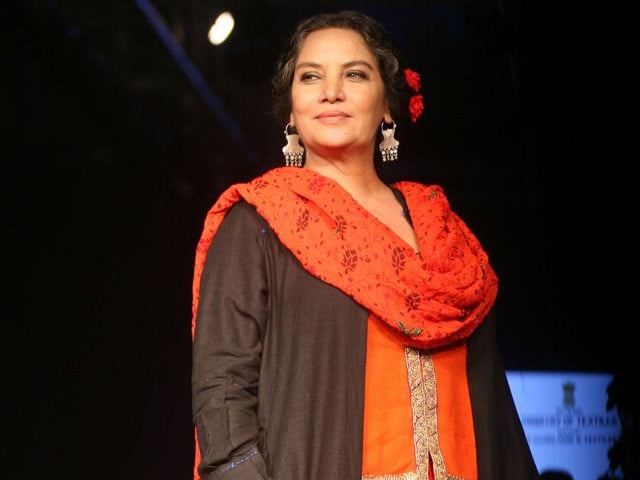 Shabana Azmi photographed at an event in Mumbai.

Veteran actress Shabana Azmi turned 65 today. Bollywood actresses like Priyanka Chopra, Dia Mirza and Huma Qureshi took to microblogging site Twitter to wish her birthday and say that she is an inspiration to them. Ms Azmimade her debut in 1974 and has since then appeared in over 120 Hindi and Bengali films

Actress-singer Priyanka Chopra said that Shabana Azmi, who turned 65 today, is her inspiration in the Bollywood.
Priyanka, who is currently in the US, posted on Twitter:

Happy bday @AzmiShabana !!! My favourite.. Always look up to u so much! Lots of love

Ms Azmi, wife of noted lyricist Javed Akhtar, started her career with Shyam Benegal's Ankur in 1974 and soon became one of the leading actresses of Parallel Cinema.
Her performances in films in a variety of genres have generally earned her praise and awards, which include a record of five wins of the National Film Award for best actress and several international honours.
Other Bollywood celebs also wished her on Twitter:

Happy Birthday @AzmiShabana. You are awesome and I am grateful to have your humanity inspire me. pic.twitter.com/YH61TCTKVY

The Masoom actress was happy to see the wishes and wrote:

Am overwhelmed by the love and affection of birthday greetings pouring in already. Feel loved and respected. Thanku all u r my strength

In her more than four decade long career, Ms Azmi has appeared in over 120 Hindi and Bengali films in both mainstream and independent cinema. She will be seen next in Sanjay Gupta's Jazbaa, co-starring Aishwarya Rai Bachchana and Irrfan Khan. The film will hit theatres next month.