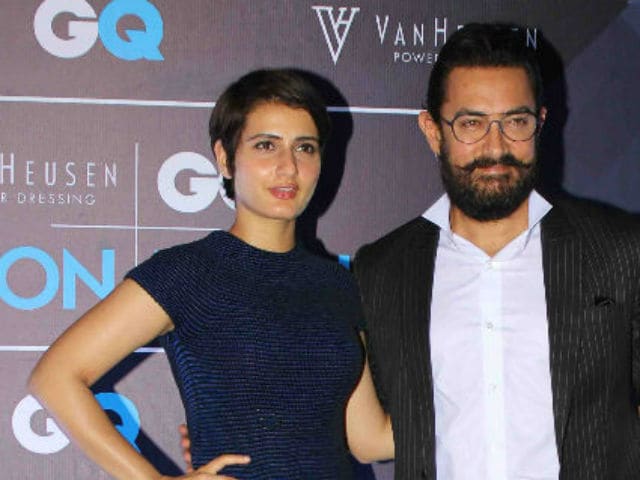 Aamir Khan and Fatima will co-star for the second time, after Dangal

Actress Fatima Sana Shaikh is all set to co-star with Aamir Khan for the second time in Thugs Of Hindostan, after Dangal. The 25-year-old actress portrayed the role of Geeta Phogat in the Nitesh Tiwari-directed biopic on wrestler Mahavir Singh Phogat. Recently, a few reports suggested that the 51-year-old actor had helped Fatima get the role in his upcoming film during the casting process. However, Aamir Khan's wife and filmmaker Kiran Rao, in a recent interview to news agency PTI, refuted the reports. The 43-year-old director said that the decision to cast Fatima was not Aamir's alone and that the team of Thugs Of Hindostan must have considered casting Fatima on merit.
"We don't deal with it (casting). It's a Yash Raj Films movie so Aditya Chopra, Vijay Krishna Acharya and Aamir have decided on it. As it is a big film for them. They would have given it (casting Fatima) a good thought. There has to be merit in it," PTI quoted Kiran Rao as saying.
Aamir Khan and Kiran Rao have been spotted at various events with the actor's Dangal daughters Fatima Sana Shaikh and Sanya Malhotra.
Earlier this month, Yash Raj Films confirmed that Fatima Sana Shaikh is a part of Thugs Of Hindostan, starring Amitabh Bachchan and Aamir Khan in a statement posted on their official website.
Aamir Khan and Amitabh Bachchan will be seen sharing the screen space for the first time in Thugs of Hindostan. Speaking about their collaboration, Kiran Rao said that 'it will be a treat for the audience to watch them.'
"There is excitement to see Aamir and Amitji together for the first time. It is going to be fun...it will be a treat for the audience to watch them," PTI quoted Kiran Rao as saying.
Thugs Of Hindostan will be directed by Vijay Krishna Acharya and produced under Yash Raj Films banner. The shooting for the film is expected to begin next month.
Thugs Of Hindostan, which is scheduled for release on Diwali next year, marks Aamir Khan's second collaboration with director Vijay Krishna Acharya. They have previously worked together in Dhoom 3.
Aamir Khan was last seen in 2016 movie Dangal. He will next feature in Advait Chandan's Secret Superstar.
(With PTI inputs)