What Akshara Haasan Learnt From Amitabh Bachchan and Dhanush 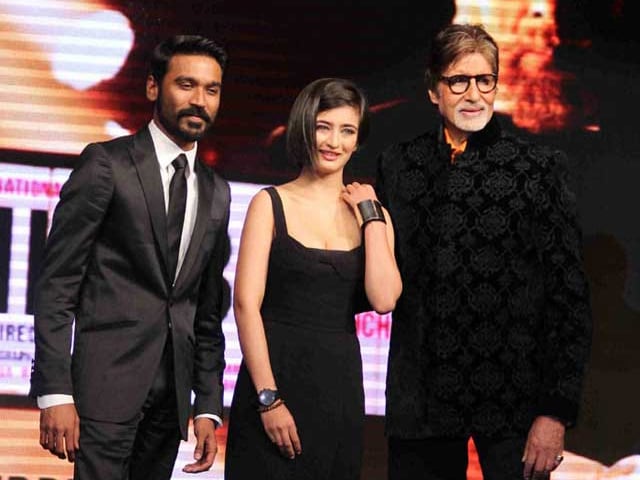 Dhanush, Akshara and Big B at an even in Mumbai.

Sharing the frame with megastar Amitabh Bachchan and Tamil superstar Dhanush in her debut movie Shamitabh has helped Akshara Haasan imbibe a valuable learning for her film journey - that she must treat every new project as her first. (Movie review: Shamitabh)

The 23-year-old, younger daughter of acclaimed actors Kamal Haasan and Sarika, was offered films before Shamitabh landed on her lap. And Akshara completely surrendered herself for her role to the director of the film, R Balki.

"I trusted Balki sir for Shamitabh. When I read the script, I loved it and I wanted to do it instantly. And knowing the fact that it has two amazingly talented actors, I didn't let my trust go from Balki sir as I knew he'll let me shine," Akshara told IANS in an interview. (Also Read: Never Had Second Thoughts About Doing Shamitabh, Says Akshara)

Of course, the young and talented girl has been feeling the pressure of being the daughter of versatile actors, but she said, "There was no pressure on me to star opposite such big names". (Also Read: Akshara Haasan Finds Comparisons With Her Parents 'Unfair')

"They all stood by my side and helped me grow as an actor. They actually made me feel comfortable on the sets. I have learnt a lot from them and there's a lot more that I can still learn. I've learnt the passion and the drive that they have for their work and how they treat every film as their first film. I wish to have that same amount of dedication and hardwork that they give to their roles," she added.

Akshara feels Shamitabh, which released today, was the perfect choice for her to step into filmdom as an actor.

"I never thought of a debut like Shamitabh. Earlier, I was approached for 10 to 15 films which I declined, but I didn't want to let down this opportunity to learn from them (those working on the film). I never imagined that my debut will be so big," said the newcomer, whose elder sister Shruti Haasan is also a popular actress.

Akshara's preparation for her role in Shamitabh involved rehearsals and training to fluently deliver dialogues in Hindi. After the movie, she wants to focus on making herself an actress who can juggle different genres. (Also Read: Akshara Haasan Took Hindi Diction Classes Before Shamitabh)

And, along the way, she hopes to become an actress with her "own identity".