What is Shah Rukh Khan the Producer Like? Kriti Sanon Answers 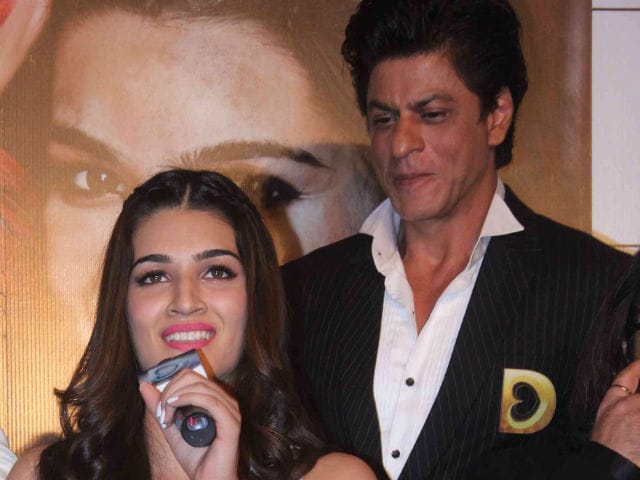 Kriti Sanon and Shah Rukh at an event to launch the trailer of Dilwale in Mumbai.

Kriti Sanon, who will feature in Rohit Shetty's Dilwale co-starring Shah Rukh Khan, Kajol and Varun Dhawan, said that SRK as a producer "wants to spend more and more". "He always says, 'When so many people come and spend their money and time to watch a film, they deserve the best'. That's how he is"

Actress Kriti Sanon says that her Dilwale co-star Shah Rukh Khan is a spendthrift as a producer who doesn't care how much money is going into a film in order to make it worthwhile.
"Sir is so cool as a producer that you can't even imagine. I think he wants to spend more and more. He doesn't care about how much money is going in as long as the film, which is coming out, is good," Kriti said at an event. Shah Rukh has co-produced Dilwale with Rohit Shetty. (Also Read: Kriti Sanon Hopes to Create 'Half the Magic' of Shah Rukh and Kajol)
"He always says, 'When so many people come and spend their money and time to watch a film, they deserve the best'. That's how he is," she added.
As seen in the film's trailer, the car stunts, action scenes and lavish locales exhibit that there hasn't been any restraint in budgeting. (Also Read: Rohit Shetty Explains Why Stunts are a 'Huge Risk' For Entertainment)
In Dilwale, Kriti is paired opposite Varun Dhawan, who plays the role of Veer, Shah Rukh's younger brother.
Kriti is certainly impressed by Shah Rukh's acting methods and says she "learnt a lot" from him.
"With Shah Rukh sir, I remember when we were doing scenes, he rehearses a lot. He rehearses his marks and lines with you. So by the time you come for your take, you wouldn't really feel that you're really doing the scene as it comes very naturally," she said.
After impressing viewers opposite Tiger Shroff and director Sabbir Khan in Heropanti, Kriti is happy to be part of a big-budget entertainer with experienced artists.
"For me it's a huge deal to be a part of the film. The Dilwale family is quite attached since we shot for so many days. So just to be a part of the family, to get this opportunity so soon in my career has been a blessing," she said.
Dilwale is releasing on December 18. It will clash with Sanjay Leela Bhansali's Bajirao Mastani, which stars Ranveer Singh and Deepika Padukone.