What Made Mehr Rampal Leave a Party in Tears? 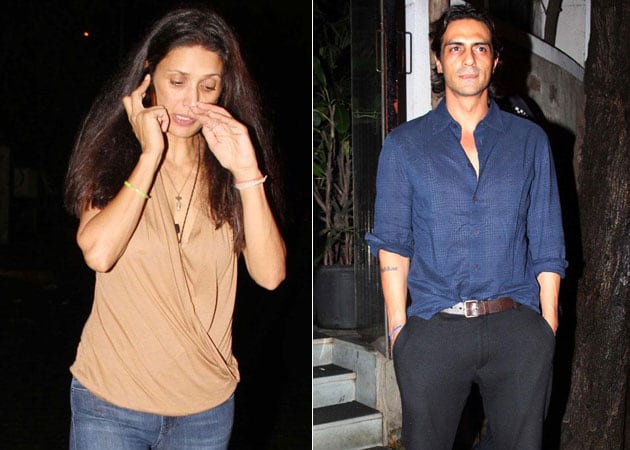 Mehr apparently had an argument with husband Arjun Rampal

How could a birthday party trigger something that apparently made Mehr Rampal leave the venue alone?

How could a birthday party trigger something that apparently made Mehr Rampal leave the venue alone? On Wednesday night, Mehr arrived at director Abhishek Kapoor (Gattu)'s house to celebrate his birthday along with husband Arjun Rampal. (Also Read: Sussanne Khan, Mehr Jessia: Still friends despite Arjun rumour?)
Their dear friend Sussane Khan was already present at the party. There were quite a few Who's Whos at the party and it seemed like it would go on for a while.
But the people outside were in for a little shock when soon after, Mehr left the venue with her face covered, even as she talked on the phone. It turns out that during the party, Arjun and Mehr apparently had some kind of an argument due to which she left the party teary-eyed.
"Arjun, Mehr, Sussane and the others were having fun at the party and then Mehr left early. She was talking on the phone while stepping out of the building and she was hiding her face from the photographers. After about an hour and half, Arjun left the party and Sussane walked out after that," says a source. What really triggered this is a mystery.
But peace seems to have prevailed as sources say that the trio was later on seen having dinner at a Khar restaurant. This time around, Mehr is said to have walked out of the restaurant with Arjun. While Arjun chose to not reply to our query, Sussane threatened to file a lawsuit.