When Aamir Khan Played Cricket And Sachin Tendulkar Cheered For Him

Aamir Khan shared a video on Twitter, where he revealed that he's a huge 'fan' of the cricketer and talked about his favourite 'Sachin moment' 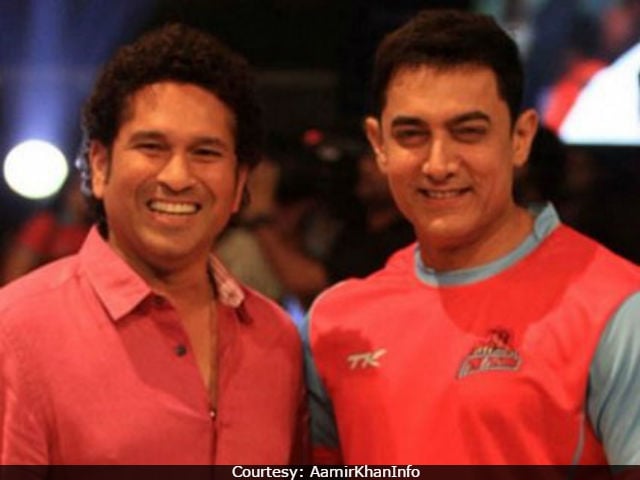 Sachin: A Billion Dreams, a film based on the life of cricketer Sachin Tendulkar, hits the theatres on May 26, and actor Aamir Khan is 'excited' to watch it. Aamir shared a video on Twitter, where he revealed that he's a huge 'fan' of the cricketer and talked about his favourite 'Sachin moment.' "When Sachin came to see Lagaan, for the first and the last time, I saw him cheering for me. That's something I'll never forget," says Aamir in the video. Lagaan, the sports drama, released in 2001 and along with the other stars, Sachin Tendulkar was also invited for the premiere of the film. "@sachin_rt, Here's to your 101st century. Break a leg! #SachinABillionDreams #7DaysToSachin Love.a.." Aamir captioned his post.
Watch Aamir's video here:

Sachin: A Billion Dreams is a story of the rise of the cricketer. Sachin Tendulkar narrates his story and stars in the later part of the film. It also features Sachin's wife, Anjali, his son, Arjun, and cricketers Virender Sehwag and Mahendra Singh Dhoni. Sachin: A Billion Dreams is directed by Emmy-nominated filmmaker James Erskine.
Last month, soon after the trailer of the film was unveiled, superstar Rajinikanth, who rarely tweets, gave his best wishes to Sachin Tendulkar. "Dear @sachin_rt , my best wishes for the success of 'Sachin ... a billion dreams'. God bless," tweeted Rajinikanth.


Dear @sachin_rt , my best wishes for the success of 'Sachin ... a billion dreams'. God bless.

Apart from Hindi, Sachin: A Billion Dreams will release in Marathi and Tamil. Sachin Tendulkar also recorded a song, Cricket Wali Beat, for the film with singer Sonu Nigam. Sachin Tendulkar debuted in 1989 and retired from all forms of cricket in 2013. He currently mentors Indian Premier League (IPL) team Mumbai Indians.