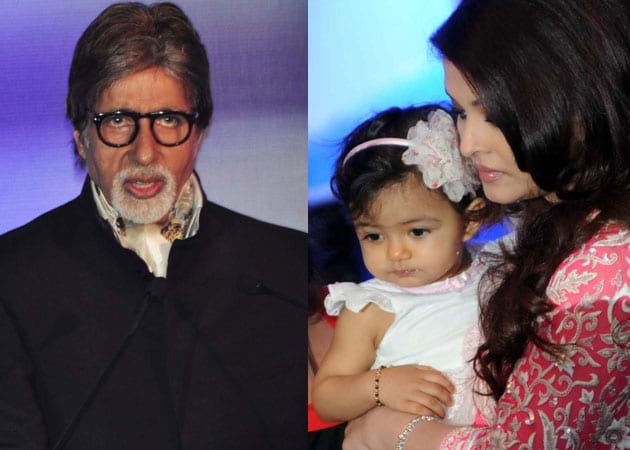 At the stroke of midnight Friday, Amitabh Bachchan experienced a moment of pride and delight - his "little" granddaughter Aaradhya sang a "Happy Birthday" song for the megastar, who turned 71 today.

At the stroke of midnight Friday, Amitabh Bachchan experienced a moment of pride and delight - his "little" granddaughter Aaradhya sang a "Happy Birthday" song for the megastar, who turned 71 today.
"A strange calmness descends on the eve of the clock that strikes 12 midnight... the family, the few that are in town, bring in the greetings, the 'little one' ably tutored sings a 'happy birthday' to herself first, and then, after suitable prompting, to me... it's these little moments that make up a birthday," Amitabh posted on his blog.
Aaradhya, who will turn two on November 16, is the daughter of Amitabh's son Abhishek and daughter-in-law Aishwarya Rai.
Amitabh and his wife Jaya have two other grandchildren -- Navya Naveli and Agastya, children of their daughter Shweta Nanda, who is married to businessman Nikhil Nanda.
For Big B, the "gifts of love and affection from the extended family, from those that we know and cannot see or meet, from people on the streets as you pass by, from the crew on the set, from those that have lived and worked with me through the ages" comprise big moments of his life too.
He was touched with the "personal effort" of his wellwishers "to prepare that personalised card, that touch of handicraft, a little something, so thoughtfully put together".
"The most expensive diamond in the world would not compare with this," he added.
Amitabh is currently seen as the host of TV game show Kaun Banega Crorepati, and he has also started shooting for his next film Bhootnath Returns.