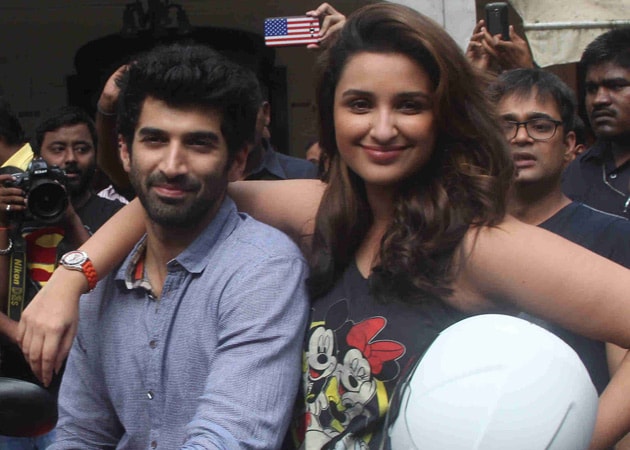 Parineeti and Aditya were promoting their movie Daawat-e-Ishq

Fans from near and far swarmed to the cafe for a glimpse of their favourite stars who were enjoying a South Indian meal as a part of their on-going 'food yatra', a promotional gimmick for their upcoming film.

So large was the turn out that it left Aditya and Parineeti not just surprised but 'scared,' as fans mobbed them. Aashiqui 2 actor Aditya said that there was even a moment when his shirt was almost ripped off! "But it was good fun," Aditya added.

Parineeti and Aditya then treated their taste buds to a Parsi lunch and dessert of Paan ice cream. While at the Parsi restaurant, Aditya also had some delicacies packed for his mother who, he says, is a fan of the cuisine.

The actors called it day after gorging on various eatables.

The next stop on their calorific itinerary was Surat, where yet again a surprise in the form of a massive crowd was in store for the stars. The actors sat in a traditional Gujarati restaurant, nibbling on food.

Gujarati food also awaited Parineeti and Aditya in Ahmedabad. In Jaipur, the duo were joined by local musicians for a melodious singing session.