Akshay tweeted a video from the event in which he danced with a college student, who clearly had a major fan girl moment. She blushed and appeared overwhelmed because, while Ileana and Esha grooved with their respective partners, this is what Akshay did 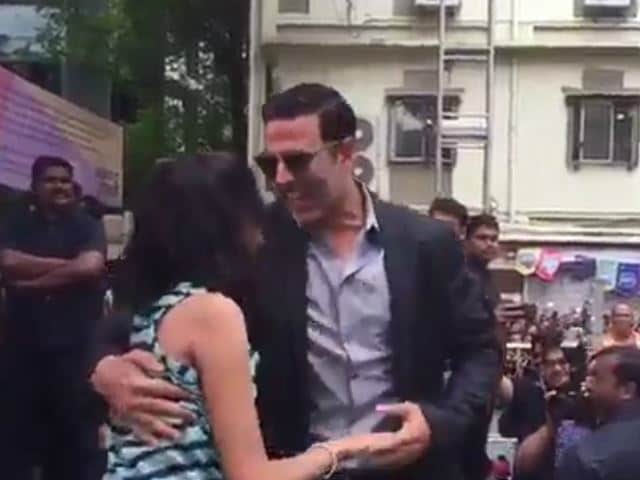 A still from the video tweeted by Akshay Kumar.

Akshay Kumar is such a charmer. No, really.
Akshay, who is busy promoting his upcoming film Rustom, flew with the team to Kolkata on Thursday and danced his heart out at a college with Ileana D'Cruz and Esha Gupta, his co-stars from the movie.
In the City of Joy, Akshay made one college student very joyful. He danced with the young woman, for whom it was clearly a major fan girl moment. She blushed and appeared overwhelmed because, while Ileana and Esha grooved with their respective partners, this is what Akshay did:


Just one word...ELECTRIFYING!Love love love being in your city Kolkata Thank you from Team Rustom! #8DaysToRustompic.twitter.com/xptB6qYsEt

This is how the stage was set:


Partners have been chosen, stage is set, it's time for some moves. #8DaysToRustomhttps://t.co/N7XMjMyuMA

Meanwhile, another student shared pictures from the venue:


Feeling great to see Akshay Kumar In Our College pic.twitter.com/5hXswCqMY8

Apart from Akshay, Ileana and Esha, it's also Ranveer Singh who has assumed the job of promoting Rustom. Presenting Ranveer as Chhupa Rustom:

Here's Team Rustom's reaction to it:

Rustom stars Akshay Kumar, 48, as Naval officer Rustom Pavri, a character inspired by the real life K M Nanavati who was tried and acquitted for the murder of his wife's lover.
Directed by Tinu Suresh Desai, Rustom will clash with Hrithik Roshan's Mohenjo Daro on August 12.