Akshay Kumar is currently filming Padman and today, he posed with the 'real life Padman' on the sets with Twinkle Khanna 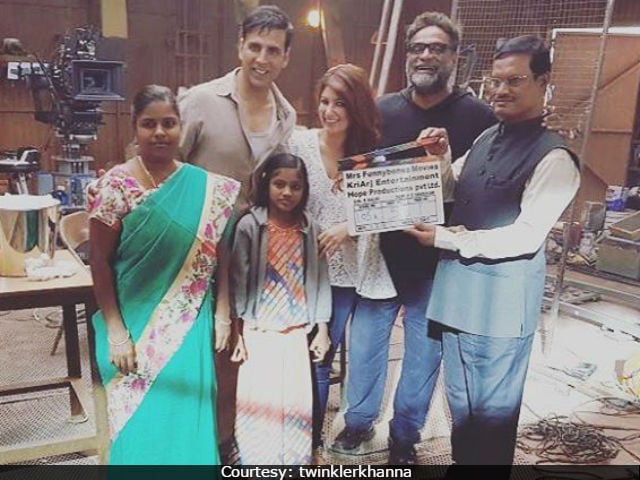 Actor Akshay Kumar is currently filming Padman and today, he posed with the 'real life Padman' on the sets. Padman is a biopic on Arunachalam Muruganantham, an entrepreneur from Tamil Nadu, who invented low-cost sanitary pad making machine to generate awareness about traditional unhygienic practices around menstruation in his village. Akshay's wife, author Twinkle Khanna, who is also the producer of Padman shared a picture on Twitter from their meeting. "On the set today with the real and reel life Padman and our brilliant director Balki," she captioned her post. The picture also features Mr Muruganantham's family. Akshay began shooting for Padman earlier in March. Actresses Sonam Kapoor and Radhika Apte are also a part of the film.
Here's what Twinkle posted:

Ahead of the shoot, Akshay, 49, posted a picture with Twinkle, 43, and wrote, "Embarking on a new journey, this time with the Mrs. First day of @mrsfunnybones' #Padman directed by R. Balki, need ur love & luck as always."

Padman is Twinkle's first film as producer and is being made under her banner Mrs Funnybones Movies. Of her collaboration with Akshay, she earlier told news agency PTI, "I think it's a great team. We are playing tennis doubles, and I think that's a pretty good foundation for a marriage to last."
Akshay Kumar recently received his first ever National Award for Best Actor for Rustom. The film is based on the 1959 Nanavati case.
Earlier this week, Akshay met Prime Minister Narendra Modi. He tweeted:


Met PM @narendramodi and got the opportunity to tell him about my upcoming 'Toilet-Ek Prem Katha.' His smile at just the title made my day! pic.twitter.com/qbvYrlbM2Y

Meanwhile, Amitabh Bachchan, who has worked with R Balki in films like Cheeni Kum, Paa and Shamitabh, is also a part of Padman. Mr Bachchan has a guest appearance in the film.