When Amitabh Bachchan played tennis with Mahesh, Leander and Naseeruddin 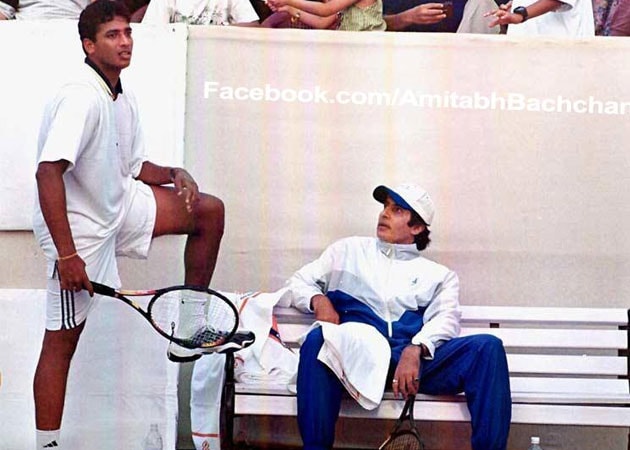 Amitabh Bachchan is back, after conquering Cannes, and so are his Tuesday memoirs.

Amitabh Bachchan is back, after conquering Cannes, and so are his Tuesday memoirs.
This week's update, posted on Facebook with a picture of Mr Bachchan and tennis star Mahesh Bhupathi, is about a charity tennis match the actor played with Mahesh as his partner (he thinks!).
The match was played in The Club, near Lokhandwala Circle in Mumbai.
Mr Bachchan writes: It was on the occasion of a charity tennis match played to collect funds for a very noble cause. It was a doubles game and the participants were - Mahesh Bhupati, Leander Paes, Naseeruddin Shah, and myself.
But he wasn't on the winning team that day. Mr Bachchan writes: I think Mahesh and I were partnering, I could be wrong, against Leander and Naseer. We lost ! And this little nugget of information from the star: Many may not know but I had joined the RajKumari Amrit Kaur Tennis Coaching Scheme in Delhi in the year soon after finishing my schooling at Sherwood College , Nainital, in 1958.
There were 4 category courts in the scheme .. The beginners, C court, B court and the A court. I reached the B court , and had to stop because I was joining the Delhi University and the Science course that I took did not make time for any sports activity. The A court players went on to play the big games - for the National team, at Wimbledon etc.
Amitabh Bachchan, tennis star? Life, the universe and everything would have been a whole lot different for everyone if that had happened.