It's been a busy few days for Amitabh Bachchan lately but not so busy that he hasn't been able to update his Twitter. In separate tweets, Big B revealed that Anil Kapoor put him in an 'embarrassing spot' and that he had had a conversation with Shah Rukh Khan, which started in Dubai and was carried to Mumbai 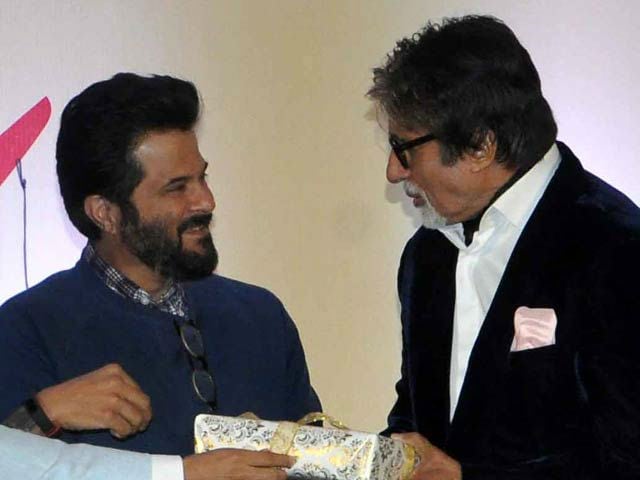 Anil Kapoor (left) and Amitabh Bachchan (right) photographed at an event in Mumbai.

It's been a busy few days for Amitabh Bachchan lately - truth be told, it usually is - but not so busy that he hasn't been able to update his Twitter, as per regular. In separate tweets, the 73-year-old star revealed that his Shakti co-star Anil Kapoor put him in an 'embarrassing spot' at last week's TOFA Awards in Dubai and that he had had a particularly stimulating conversation with Shah Rukh Khan at the same awards which they carried over back home.
While presenting the Living Legend trophy to Big B, Mr Kapoor was so overcome by emotion that he bent down and touched the Piku star's feet - a sashtang pranam to be precise. This, the senior actor said, was "so embarrassing."

T 2182 -At TOIFA Anil Kapoor gives me the Lifetime Award and then this ... so embarrassing !! pic.twitter.com/vREh1gm0ib

Mr Bachchan also won the Critics Best Actor award for his role in Piku.
Meanwhile, Big B and actor Shah Rukh Khan's conversation crossed borders. The Mohabbatein co-stars, as Mr Bachchan said in his caption, started their "discussion" during TOIFA in Dubai and which carried on to Sunday's style awards in Mumbai. The subject of their riveting discussion was this:

T 2182 -A TOIFA, SRK and me discuss, then a day later at HT fashion award, we are still discussing .. bone pains !! pic.twitter.com/lsPcaMr1TR