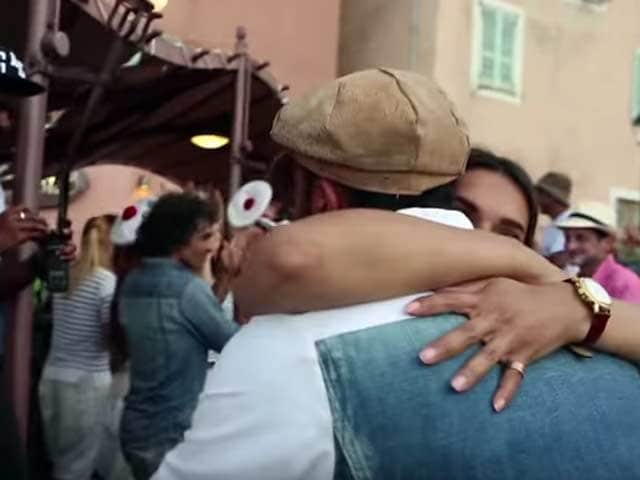 A still from the making of Matargashti song from Tamasha

A series of behind-the-scenes videos from the sets show the two actors dancing with full abandon on the streets of Corsica. Agar Tum Saath Ho, perhaps the most intense of all the songs so far, had emotional scenes and dramatic exchanges. behind-the-scenes Matargashti involved prancing about on cobbled streets and sealing the fun with a hug

Actors Deepika Padukone and Ranbir Kapoor had fun as they worked while shooting for their upcoming film Tamasha. A series of behind-the-scenes videos show the two actors dancing on the streets of Corsica - where much of the action takes place - entertaining crowds of foreigners and hugging each other after wrapping a song sequence. (Also Read: Deepika Padukone is Ranbir Kapoor's Muse in Tamasha: Imtiaz Ali)
Wat Wat Wat involved a Tamasha of the quirkiest sort:

Agar Tum Saath Ho, perhaps the most intense of all the songs so far, had emotional scenes and dramatic exchanges:

Heer Toh Badi Sad Hai took director Imtiaz Ali and his team all the way to Punjab amid folk singers and upbeat villagers.

Behind-the-scenes Matargashti involved prancing about on cobbled streets and sealing the day with a hug.
Imtiaz Ali admitted it was chaotic and emotional.

In Tamasha, Deepika reportedly plays an Asterix fan (which explains Corsica, the setting for one of the indomitable Gaul's adventures) who falls in love with Ranbir's character after a chance encounter. They form a troupe to stage plays and fall in love along the way.
Deepika and Ranbir last collaborated on 2013 hit Yeh Jawani Hai Deewani. Ranbir and Imtiaz reunite after the acclaimed Rockstar and Deepika and Imtiaz after Love Aaj Kal.
Tamasha is out on November 27.