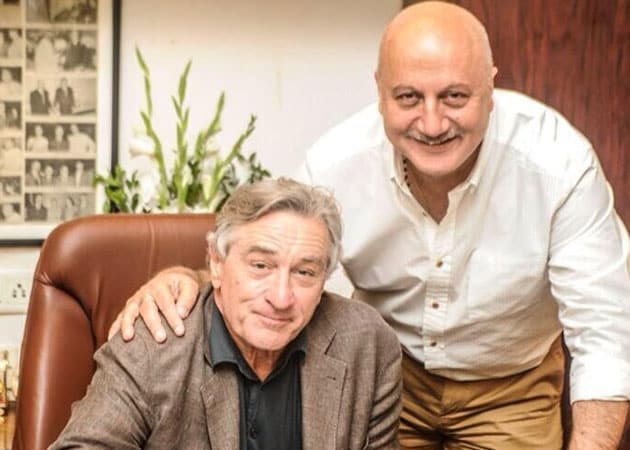 Bollywood actor Anupam Kher says his "fantasy came true" when Hollywood legend Robert De Niro sat in his chair.
De Niro, who was on a visit to India for THiNK 2013, a thought-provoking fest in Goa, he made sure he visited his Silver Linings Playbook co-actor Anupam in Mumbai.
Anupam Kher shared a picture of De Niro's visit to his acting school Actor Prepares, where some other Bollywood celebrities like Ranbir Kapoor and Varun Dhawan were also in attendance.
"Making Robert De Niro sit in my chair in my office. Actor Prepares will always be the greatest joy of my life," Anupam posted on his Twitter page along with a photograph.
"All dreams come true. But Robert De Niro coming to our school was a fantasy come true," added the 58-year-old.
Photographs of the closely guarded event reveal that Ranbir was most excited to see De Niro and he even sought his blessings, while Varun too was upbeat about meeting the screen hero. Kirron Kher, Ayan Mukerji, Anil Kapoor and Aditya Roy Kapur present too.