"Salman Khan was shooting for Tubelight and he was supposed to pack up in the night but he asked people to pack up early as he wanted to meet Jackie Chan," Sonu Sood told PTI 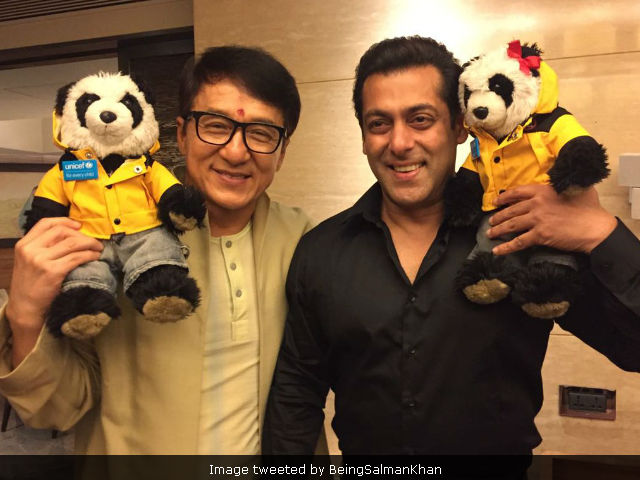 Chinese star Jackie Chan was in India last week to promote his Indo-Sino film Kung Fu Yoga with his Indian co-stars Sonu Sood, Amyra Dastur and Disha Patani. The 63-year-old actor had expressed his desire to meet superstar Salman Khan and the Dabangg star took note. Salman, 51, wrapped the shoot of his film Tubelight early to meet Jackie Chan in Mumbai last week, Sonu Sood told news agency PTI. "Salman always wanted to meet Chan. He was shooting for Tubelight and he was supposed to pack up in the night but he asked people to pack up early as he wanted to meet Jackie Chan," Sonu told PTI. Kabir Khan-directed Tubelight also stars Chinese actress Zhu Zhu.
Salman Khan and Sonu Sood have co-starred in 2010 film Dabangg and the latter says that they've been great friends ever since. "He is very sweet. He gets very excited whenever something good happens in my life. I remember he was very happy when me, Jackie and he were sitting and chatting. He told Jackie that I'm his one of the most favourite people in the industry. And whenever something good happens in my life he feels as happy as I do. Those words were very special and at the same time they motivate you in life to work harder," Sonu said.
In fact, Salman Khan was one of the first celebs to share the trailer of Sonu's kung Fu Yoga on Twitter. On Wednesday, Salman also shared a video on social media featuring him, Sonu and Chan.

Kung Fu Yoga, directed by Stanley Tong, is set to release on February 3 in India. The film released last week in China and USA.
(With PTI inputs)