Shah Rukh Khan said, "I wanted to do a film with Akshay Kumar. However, the story didn't work out" 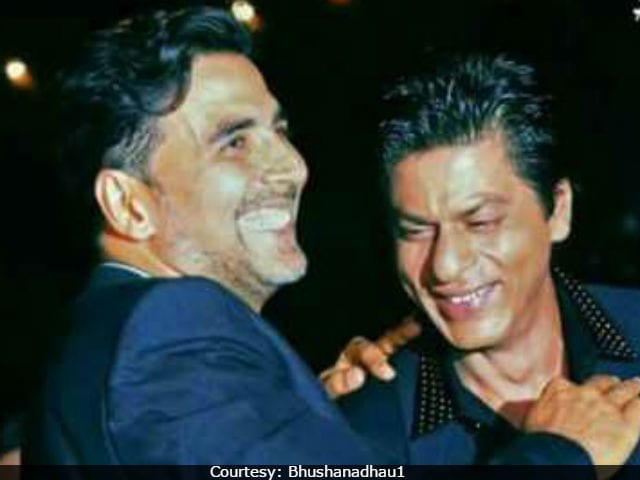 Superstar Shah Rukh Khan, who is currently filming Imtiaz Ali's next with Anushka Sharma revealed that he wanted to do a film with Akshay Kumar, reports DNA. Last year in December, Salman Khan had announced that he along with filmmaker Karan Johar, will produce a film starring Akshay. "I wanted to do. But the story and all didn't work out. It should have been done a long time back. But it's very good that Karan and Salman are making a film with Akshay. I'm sure he is really open to it," the 51-year-old actor told DNA. SRK's yet untitled film will release along with Akshay and Bhumi Pednekar's Toilet: Ek Prem Katha on August 11.
Salman, Akshay and Karan had announced their collaboration on social media: The film will be backed by Dharma Productions and Salman Khan Films.


Coming together for a film produced by friends, @BeingSalmanKhan and @karanjohar, starring me! Out in 2018. pic.twitter.com/aOyfZS4p94

Supremely excited to coproduce with @BeingSalmanKhan#SKF on a film starring @akshaykumar directed by Anurag Singh...releasing 2018! pic.twitter.com/QAUrcecxjx

Supremely excited to coproduce with @BeingSalmanKhan#SKF on a film starring @akshaykumar directed by Anurag Singh...releasing 2018! pic.twitter.com/QAUrcecxjx

"They should not be taken as individuals, as Karan or Salman. It's Dharma and SKF. They are different identities, they are film producers. It's about the company, not about individuals. So, two companies have come together to make a film with a big movie star. Filmmaking should be collaborative," the Dilwale actor told DNA.
Both SRK and Akshay's projects are one of the highly-anticipated films of the year. Both the films will cash on the Independence Day weekend.
Apart from Toilet: Ek Prem Katha, Akshay Kumar, who recently won his first ever National Award for Rustom, will star in Rajinikanth's 2.0 and Padman. Meanwhile, Shah Rukh Khan will be next seen in Anand L Rai's untitled film, in which, he plays a dwarf.