Where Are Bollywood Celebs Headed to Celebrate the New Year? 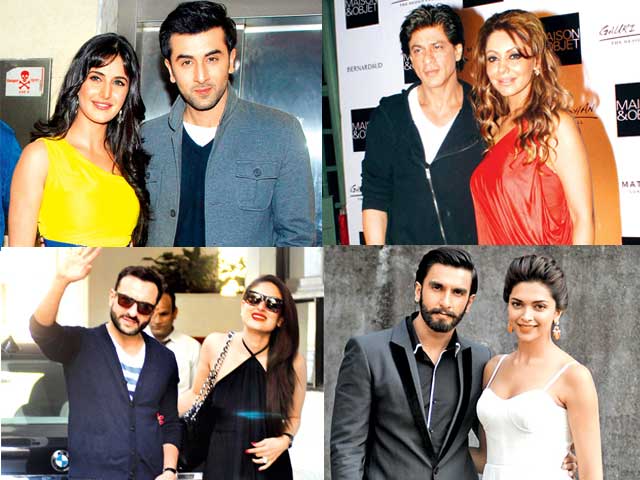 The countdown to 2015 has begun and Bollywood stars have already flown out of the country to usher in the New Year with their loved ones. For some, it is a conscious decision while for others, it is work that will keep them away from home.

Shah Rukh Khan has chosen the desert Emirate to ring in the New Year. While his wife Gauri and daughter Suhana are already at their Dubai home and are planning a bash, SRK will join them soon. His son, Aryan, is expected to tag along. Hrithik Roshan's sons Hridhaan and Hrehaan joined him in Dubai last week. The actor, who was supposed to shoot for a commercial there, decided to extend his trip and has parents Rakesh and Pinky Roshan for company. Even Sridevi is in the city with her daughters Jhanvi and Khushi minus her hubby Boney Kapoor.

Katrina Kaif flew down to London to celebrate Christmas with her family and will apparently jet off to New York to bring in the New Year with beau Ranbir Kapoor by her side.

Anushka Sharma has gone Down Under to welcome 2015 along with her cricketer-boyfriend Virat Kohli.

Student of the Year co-stars Alia Bhatt and Sidharth Malhotra may also leave for NYC to see the ball drop.

Deepika Padukone has taken a break from work and is in Maldives with her family. Her co-star and 'good friend' Ranveer Singh may join her.

Shraddha Kapoor and Varun Dhawan are currently shooting for ABCD 2 in Los Angeles but are expected to be home for New Year celebrations in the company of Shraddha's mother Shivangi and Varun's family.

Akshay Kumar and Twinkle Khanna are in South Africa for her birthday (December 29) as well as the New Year, with son Aarav and daughter Nitara in tow.

Priyanka Chopra and Randeep Hooda will head to Goa with their respective families on New Year's eve. Also Abroad...

Jacqueline Fernandez will be flying to Bahrain where her family is based.

Farah Khan and her husband Shirish Kunder are in London with their triplets for a New Year bash. Quiet Getaway

Abhishek Bachchan and Aishwarya Rai Bachchan with daughter Aaradhya have left for an undisclosed location for the 2015 festivities.