Why Ahana Deol's wedding will be like 'a true Hindi film' 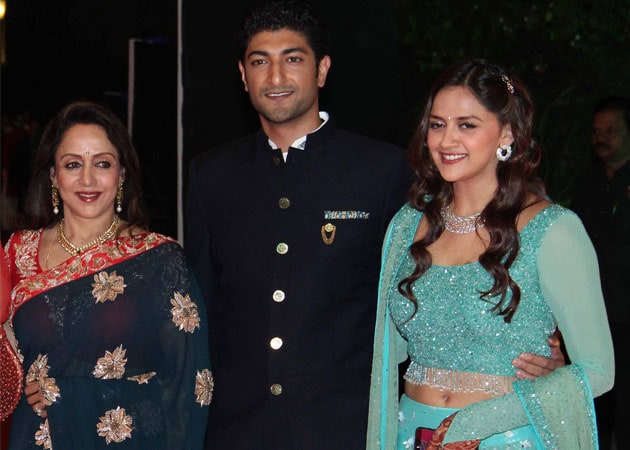 Hema Malini with her daughter Ahana and son-in-law Vaibhav

Dream Girl Hema Malini is excited about her younger daughter Ahana's "big fat Punjabi wedding" and says that this was something which she missed when she got married to veteran actor Dharmendra.
Ahana, who will get married to Delhi based businessman Vaibhav Vora on Sunday, had her mehendi fuction on Friday.
"My marriage happened very quietly and quickly. There was no time or occasion for a big ceremony. But now there is finally going to be a big fat Punjabi wedding in my family," said Hema.
"From the very Punjabi baraati to our doorstep to a very Tamil welcoming of the groom into the mandap (platform for wedding rituals). I am very excited," she added.
The wedding would have Punjabi as well as South Indian touch to it.
"Like a true Hindi film my daughter's wedding will have two halves. The first-half of the wedding ceremony would be done in Punjabi style. The second-half of the wedding would be done in Tamil style," she said adding that there will be "two pundits (priests), one from north India and the other from the south".
The wedding of her younger daughter comers more than one and a half years after her elder daughter Esha Deol's wedding to diamond merchant Bharat Takhtani. This has made things easier for Hema, but she says that she still has her hands full.
"As Ahana's is the second wedding in my family in quick succession it's easier this time to arrange everything since we already know what all needs to be done. Having said that, it's no less difficult for us to make all the wedding arrangements for the second time," she said.
"Luckily for me all the nitty-gritty is being taken care of by my two bhabhis (sisters-in-law), the wives of my two brothers Jagannath and Kannan. I don't know what I'd have done without them," she said.
The bride's father Dharmendra is even more nervous than the bride and her mother.
"I've told Dharamji, tension bilkul nahin lene ka (don't take any tension). He's very nervous and tense. Ahana is his laadli (favourite). I've told him to just relax and leave everything to me and my family and then of course, there is the events manager, who is following our instructions," she said.
Talking about her family, the Sholay actress is thrilled to welcome another son-in-law.
"You know, this is exactly why I've never felt any need for friends. My family is my friend. My brothers and their wives take care of everything. Now I've two sons to complete my family," she said.
"People always reminded me that I've no sons, only two daughters. But I want to tell them that now I've two sons. Both my sons-in-law are as good as my own sons. In any case, my daughters are like my sons as well as daughters. Esha always says she is my son," she said.
While Esha has stayed close to her mother in Mumbai after marriage, Ahana will move to Delhi after the wedding.
"Her husband and his family are Delhi-based, so naturally she will shift base to the Capital. Ahana gets very sad when she thinks of the impending distance between us. But I keep telling her not to fret," she said.
"Traveling from Delhi to Mumbai is now like catching a bus from your home to the suburbs. Besides, Ahana's sasural is very close to the airport in Delhi. Ahana's mother-in-law keeps reassuring her she would never have to miss her mother," she added.
Coming back to the impending wedding the busy mother of the bride says, "The Mehendi ceremony will be followed by the wedding and reception. So the next few days are going to go in a mad swirl of activities."
Ahana's wedding clothes are being designed by Neeta Lulla.
"She (Neeta Lulla) is an old family friend. She she took over the responsibility of almost the entire pre-wedding, wedding and post-wedding clothes for my daughters and I. Almost all our clothes are being done by Neeta, except a few by Manish Malhotra and Shyamal and Bhumika," she said.