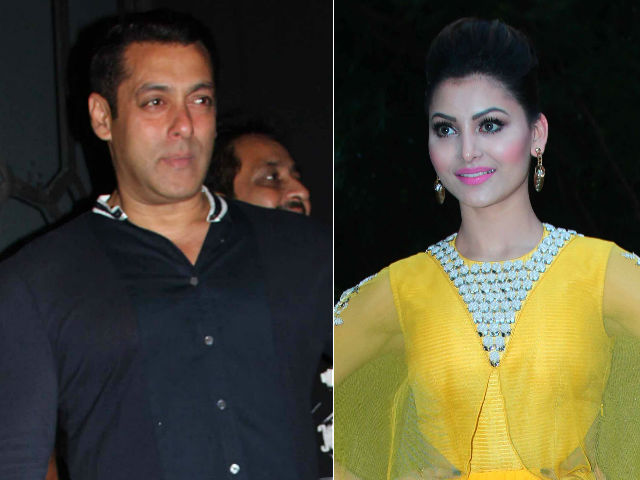 It's November, the month that actor Salman Khan was supposedly to make it official with rumoured girlfriend Iulia Vantur - wedding bells would ring, insisted tabloids some months ago. Now that Salman's speculated month of reckoning is here, not only does Iulia appear to be absent, she may or may not have been replaced by actress Urvashi Rautela.
Salman, 50, and Urvashi, 22, are currently trending, on the strength of a report in Deccan Chronicle that appears to forecast a possible romance. The grounds for this are thin - Urvashi has been pictured frequently dropping by the Khan residence in Mumbai's Galaxy Apartments. In this, she is surely no different from the several minor actors who Salman has taken under his wing - actors like Daisy Shah.
The Deccan Chronicle does also attribute Urvashi's visits to mindfulness of her career. "Recently Urvashi was snapped at Galaxy Apartment and she is often found giving a visit to the place," the report quotes a source as saying. The headline, however, asks if Urvashi is the 'new girl in Salman's life.'
Urvashi Rautela, winner of several beauty pageants, has much to be mindful of. Her handful of films include Singh Saab The Great, Sanam Re and Great Grand Masti, and she's appeared in a couple of music videos for Honey Singh - as such, she would greatly benefit from Salman's legendary large-heartedness.
Meanwhile, mid-day ran a report yesterday speculating on the whereabouts of Iulia Vantur, the supposed girlfriend Salman Khan has never acknowledged. Iulia, a Romanian TV personality, is apparently in her home country struggling with visa issues. The Khans spent the Diwali weekend holidaying in Goa without her and she's been posting mysterious tweets such as this: "God has given each one of us 2 eyes, ears, hands, 2 legs. We need the matching heart. Celebrate love, it's the most beautiful gift we have!."
Iulia, 36, was apparently done with Salman's refusal to commit, reports mid-day. This, after she was frequently photographed accompanying him to shoots and events like Preity Zinta's wedding in the last few months.
Salman Khan, who turns 51 next month, is currently making Tubelight with Kabir Khan, who directed him in Ek Tha Tiger and Bajrangi Bhaijaan.