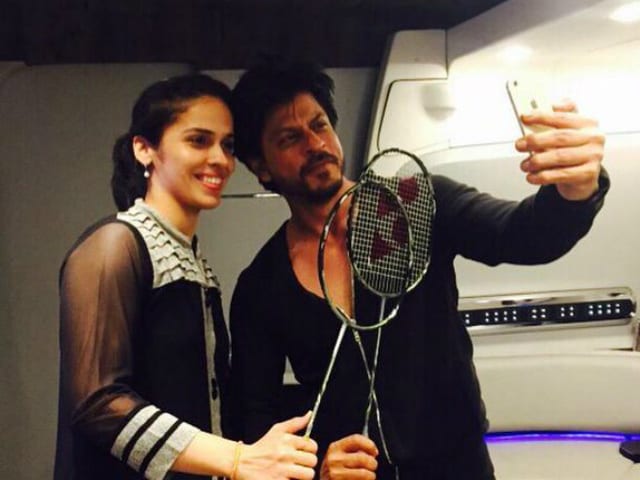 It's no secret that Saina Nehwal is a massive Shah Rukh Khan fan (courtesy: Twitter)

Shah Rukh Khan offered to hold badminton star Saina Nehwal's hand, in a tweet posted on Tuesday. Okay, we know how that sounds and the truth of the matter is far more innocent - and rather sweet. Saina's original tweet was a picture of herself at Bollywood Parks in Dubai, a film-related theme park. Saina evidently took a spin on the ride titled RA.One Unleashed, named after SRK's film. To Saina's post, SRK responded offering to come hold her hand the next time she was braving the ride - with a disclaimer. It was the least he could do, really, since Saina described Shah Rukh Khan as her 'favourite superstar.'
This was their full exchange on Twitter:


@NSaina next time will come on the ride with u. But Let me warn u, I am a nervous rider so will hold ur hand tight https://t.co/88NmgUvmm7

I really enjoyed the ride today and with u it will b superrrrrr https://t.co/LNEWPwCpDv

It's no secret that Saina Nehwal is a massive Shah Rukh Khan fan. Last year, when the actor was filming Dilwale in Hyderabad, a Khan-struck Sania tweeted asking if she could come visit him on set. Of course, SRK tweeted back. They did, indeed, meet and SRK posted pictures of the two posing with racquets.


Made sure @NSaina had no strings in her racquet..maybe the only way 2 beat her at badminton. U hav a lovely family. pic.twitter.com/vbwpdjGk5i

Oh my GOD Shahrukh sir ur such a nice person very happy to meet u . U made my day thank u so much pic.twitter.com/NbAg5anYz3

Shah Rukh Khan, meantime, is as busy as he habitually is. His film Dear Zindagi, co-starring Alia Bhatt, opened last month and he's now prepping for his next movie Raees. The trailer of Raees released last week and went insanely viral in less than 24 hours. Raees, directed by Rahul Dholakia, stars SRK as the titular Raees Alam, a boot-legger and underworld don operating in Gujarat. Nawazuddin Siddiqui plays the cop who gies after him and Pakistani actress Mahira Khan, in her first Bollywood film, plays Raees Alam's wife, Mohsina.
Raees will release on January 25, alongside Hrithik Roshan's Kaabil.