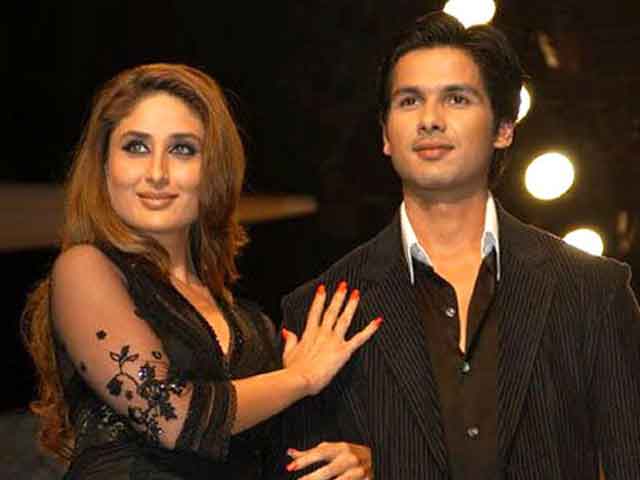 "I was aware of Shahid's marriage. He had told me he is getting married. I am happy. Marriage is a beautiful commitment and I wish him all the best," Kareena said

Actress Kareena Kapoor Khan is quite 'happy' to hear of the upcoming wedding of her ex-boyfriend Shahid Kapoor and says she might be a part of the festivities.
Kareena, 34, and the Haider star reportedly dated each other for three years before separating in 2007. The 34-year-old actor will reportedly marry Delhi girl Mira Rajput soon.
"I was aware of his marriage. Shahid had told me he is getting married. I am happy. Marriage is a beautiful commitment and I wish him all the best," Kareena told PTI in an interview.
When asked if she had any piece of advice for Shahid, Kareena, who has been married to actor Saif Ali Khan for three years now, said, "I am nobody to advise anyone." So, would she attend Shahid's wedding if invited? "Yes, I would," said the actress.
Shahid was previously linked to a series of Bollywood actresses including Vidya Balan, Priyanka Chopra, Sonakshi Sinha, Nargis Fakhri, Bipasha Basu, Anushka Sharma and Huma Qureshi.
Kareena and Shahid will be next seen in Udta Punjab though they will not be romantically involved in the film. Udta Punjab, which also co-stars Alia Bhatt and Punjabi star Diljit Dosanjh, revolves around the issue substance abuse in Punjab.
"For us to come together in a film, the script has to be good. There has never been a script. The script of Udta Punjab required us. But we are not opposite each other, it is a three-track film. My character is not romantically involved with him. We are part of the same drug drama," Kareena said.
"I am playing a doctor in the film. It is an amazing film. I loved the film. When Abhishek (Chaubey) was narrating the script, I found it brilliant. I wanted to be part of this film. I am sure people will talk about the film once it is released," she added.
Kareena is happy with Shahid's success after his performance in the highly-acclaimed Vishal Bhardwaj-directed film Haider. "I am happy for him. He is doing wonderful work. He is a good actor. I would love to work with him," she said.