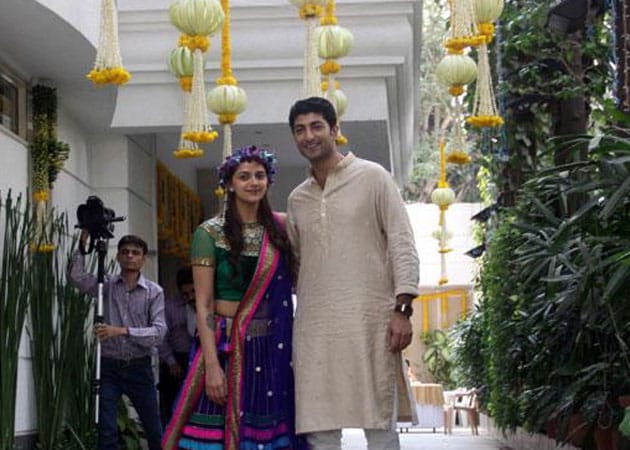 Ahana with her fiance Vaibhav at a pre-wedding function

There's another Deol daughter getting married and while we can't wait to see what Dharmendra and Hema Malini's second daughter Ahana will wear.

There's another Deol daughter getting married and while we can't wait to see what Dharmendra and Hema Malini's second daughter Ahana will wear, we're also waiting to find out if her half-brothers Sunny and Bobby will be no-shows at the wedding on February 2.
The actor brothers, who are Dharmendra's sons with first wife Prakash, were conspicuous by their absence when Hema's elder daughter Esha married businessman Bharat Takhtani in 2012. At the time, Sunny and Bobby skipped the mehendi, the sangeet, the wedding as well as the reception - all of which events were attended by the who's who of Bollywood.
Deol patriarch Dharmendra's private life has been distinctly unorthodox ever since he married co-star Hema Malini in 1980. At the time, Dharmendra was already married to Prakash Deol and their sons, Sunny and Bobby, were over 20 and a pre-teen respectively.
Dharmendra, who converted to Islam to marry Hema, never divorced his first wife and has maintained two separate families ever since. Bollywood lore ascribes much friction between Dharmendra's first family and second, but Sunny and Bobby have popularly been believed to be very fond of their half-sisters which is why many eyebrows were raised over the absence from Esha's nuptials.
Both brothers have already started out without marking attendance at this year's celebrations. They were reportedly absent at a pre-wedding function held at Hema Malini's home on January 31, though father Dharmendra was there.