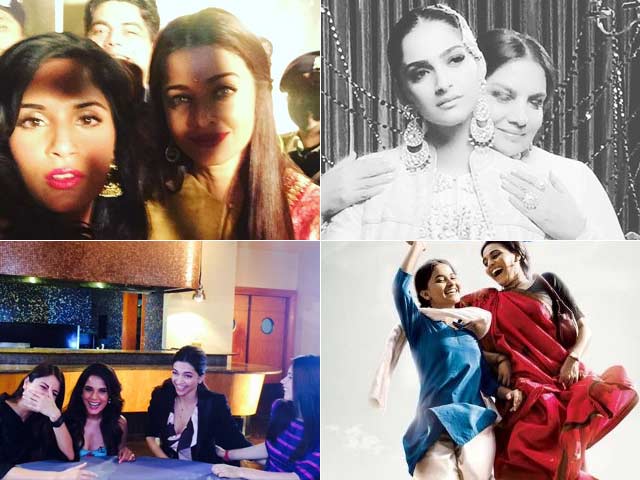 Sarbjit actress Richa Chadha posts a picture of herself with her co-star Aishwarya Rai Bachchan. Sonam Kapoor toasts 'girl power' and Swara Bhaskar's new film about a mother-daughter relationship. Here are a few inspiring pictures from our 'she-roes' on the occasion of Women's Day

What happens when you mix mocha and vanilla? As per Richa Chadha, an unbeatable concoction of 'she-roes.' On Women's Day, the Bollywood actress posted an image of herself and her Sarbjit co-star Aishwarya Rai Bachchan captioned, 'mocha + vanilla.'

In Sarbjit, Ash plays Dalbir Singh, sister of Sarabjit Singh, the Indian citizen who died in a jail in Pakistan. Richa plays Sarabjit Singh's wife.
Richa, meanwhile, also tweeted an old picture of herself having a good time with her colleagues Deepika Padukone, Anushka Sharma and Kalki Koechlin.

Sonam Kapoor raised a toast to 'girl power' by tweeting the first poster of her close friend Swara Bhaskar's upcoming film Nil Battey Sannata, based on the mother-daugher relationship.


From Neerja to Chanda this women's day it's all about girl power! Introducing the official... https://t.co/oGqzlivRmApic.twitter.com/JDZrZXIX01

The poster features Swara and her on-screen daughter jumping with happiness.
Sonam also tweeted this stunning picture of herself with her Neerja mother Shabana Azmi: