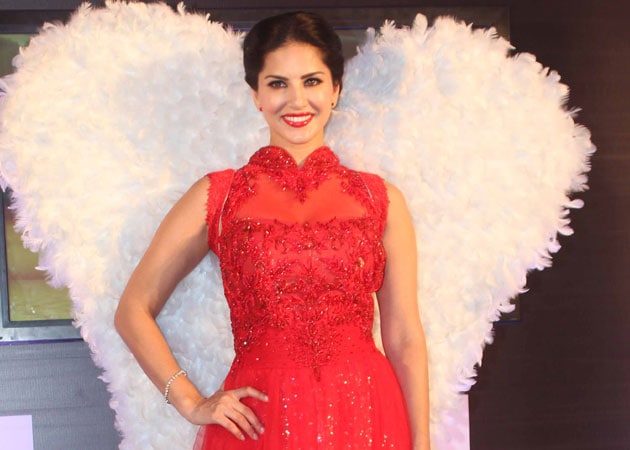 Sunny looked radiant and ravishing in a red gown at the launch press conference of MTV Splitsvilla Season 7.

Looking radiant and ravishing in a red gown, Sunny Leone smiled, laughed and blushed here on Thursday afternoon as five men from Delhi's media circle tried their luck in wooing the Indo-Canadian adult film actress who has worked her way to popularity in Bollywood over the past three years.
At the launch press conference of MTV Splitsvilla Season 7 here, Sunny, who is hosting the reality show with Nikhil Chinapa, had a contest for the media. They had to pen an innovative idea each on a chit, and later on stage, five chits were opened randomly and the persons were called on stage. (Also read: Sunny Leone "Happy" About Getting Noticed in Bollywood)
A veteran cameraperson from a daily sang a Bengali number to woo the Ragini MMS 2 heroine, while a young man was creative enough to weave an impromptu poem around the beauty and another one sang the popular Yo Yo Honey Singh's chartbuster Sunny sunny and did a spontaneous jig. There were two shy men among the five - one ended up saying that since writing is all that he knows, Sunny should give him her email ID so he could pen something for her and express himself, while one merely said, Aap bahut khubsoorat hain (You're very beautiful").
Sunny was flattered, and chose two winners who got a chance to attend a MTV Splitsvilla party in conjunction with the launch of two new flavours of Breezer Indimix here on Thursday night.
After having started her journey in Mumbai as a participant in reality show Bigg Boss in 2011, Sunny is excited to be doing TV again. In between, she featured in MTV Haunted Weekends, but she says the new show has been a different experience for her and one full of fun. (Also read:Sunny Leone Gets Diamond Necklace From Husband for Her Birthday)
"We had a whole lot of fun while the palace where we shot (Samode Palace, Jaipur) is really pretty and I got to learn a lot from Nikhil. It's been an enjoyable experience," Sunny said here.
MTV Splitsvilla 7, which goes on air on June 14, will see 20 girls wooing and vying for the attention of seven male celebrities from the small screen - Ayaz Ahmed, Abhishek Malik, Ashwini Kaul, Mayank Gandhi, Mayank Pawar, Rishabh Sinha and Shravan Reddy.
Sunny says, she has almost lived the journey of the contestants as she could feel the laughter, tears, anger, happiness, sadness and more when they experienced it, and she even had "nightmares" when the contestants fought. But the actress, who believes in true love, says she felt joyous when she saw some "connections" being made.
"I've had a fairytale love story with my husband, and I feel it's a happy feeling to see one emerging in front of you," she added.
Sunny married Daniel Weber in 2011.