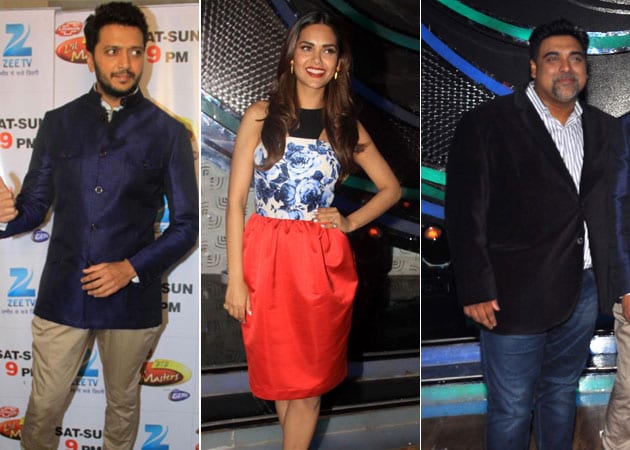 Riteish, Ram and Esha are looking forward to the football matches

The 2014 FIFA World Cup begins in Brazil on Thursday, and just like most football bans, even Bollywood celebrities can't wait to get glued to their TV screens.

The 2014 FIFA World Cup begins in Brazil on Thursday, and just like most football bans, even Bollywood celebrities can't wait to get glued to their TV screens. While Riteish Deshmukh plans to catch up on the action with his wife Genelia D'Souza, Ram Kapoor is pinning hopes on Brazil to clinch the cup. (Also Read: Shah Rukh Khan Has 'TV Glue' Ready for FIFA World Cup)
Riteish is a bigger cricket fan, but Genelia, who's expecting their first baby, loves football.
"I'm a huge fan of cricket and I have played a bit of football. My wife watches football and she keeps a track of every team and player," Riteish, 35, said here on the sets of Dance India Dance Li'l Masters.
"She accompanies me every time I want to do something. So, this time I want to give her company in watching any match she wants to," added the soon-to-be-father.
Riteish was on the set of the dance reality show to promote his forthcoming film Humshakals with the rest of the cast and director Sajid Khan.
His co-star Ram Kapoor, also a football fanatic, is backing host country Brazil to win the cup this year.
"I enjoy it (football), but I don't get a chance to watch all the matches. I have always backed Brazil and this time the tournament is in Brazil. Hopefully, this time Brazil will win," Ram said.
Actress Esha Gupta is also a football fan and said, "Everyone knows that I love football. This time the matches are in Brazil and I hope this time they win."
The FIFA World Cup final will be played on July 13.