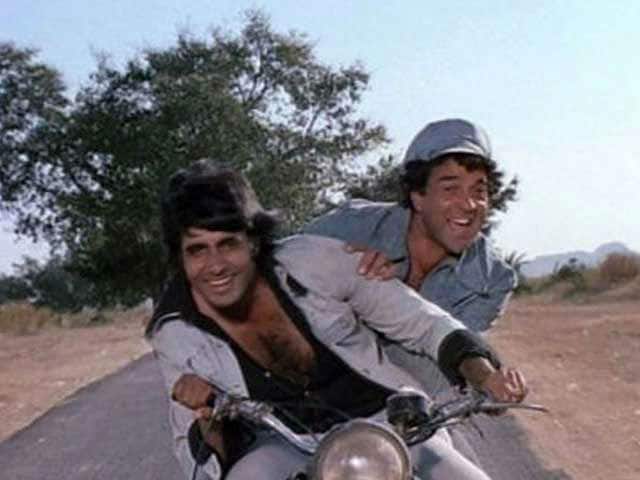 A still from the film Sholay.

On Friendship Day, actor Amitabh Bachchan wished his colleagues Dharmendra and Shatrughan Sinha with a heartfelt message.
The 73-year-old Piku star shared a few pictures of himself with the two veteran actors on Twitter and captioned it:

Mr Bachchan and Dharmendra, 80, redefined the bond of friendship on screen with the 1975 blockbuster Sholay, where they played best friends and partners-in-crime Jai and Veeru.
Mr Bachchan posted a picture in which he is holding a photo frame with a still of him and Dharmendra from Sholay. Kuch pal yadgar ho jaate hain, humesha ke liye (Some moments become memorable forever) Happy Friendship Day," he wrote.
In another picture, Big B can be seen greeting his 70-year-old Dostana co-star with a bouquet.
Referring to Mr Sinha's famous dialogue Khamosh, Mr Bachchan wrote, "Aye dost teri dosti ki kami, Har pal mehsoos hoti hai. Jab sunte hai Khamosh lafz kisiki juban se, tumhari yaad aapne aap aajati hai"
Amitabh Bachchan and Shatrughan Sinha have co-starred in films like Naseeb, Kala Patthar and Parwana, while with Dharmendra, Big B has featured in Chupke Chupke and Ram Balram.
(Except for the headline, this story has not been edited by NDTV staff and is published from a syndicated feed.)