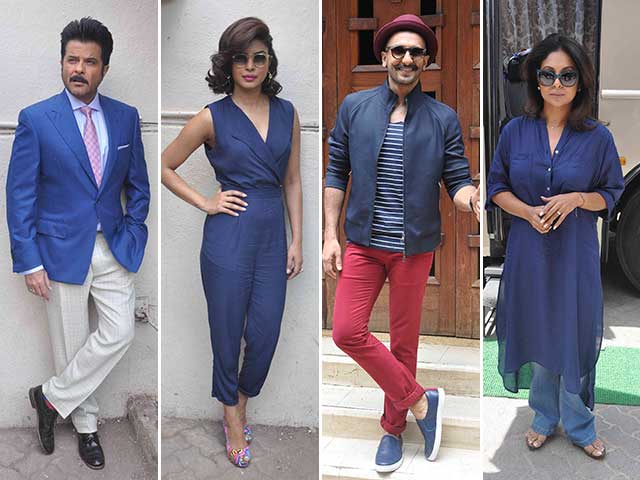 The Mehras who form the centrifugal force of the Zoya Akhtar-directed Dil Dhadakne Do are so dysfunctional collectively that nothing but a Mediterranean cruise will sort them out. The effects of this industrial strength medicine will be revealed on screen on June 5.
Meanwhile, be forewarned by this revealment from Anil Kapoor, who plays the patriarch Kamal Mehra. His dissection of the Mehra dysfunctionality divides up the family into varying degrees of individual off-kilterness, from Priyanka Chopra, who plays relatively 'perfect' Mehra daughter Ayesha, to Ranveer Singh, her off-the charts brother Kabir. "I have a very dysfunctional son in Ranveer Singh, my wife (played by Shefali Shah) is slightly dysfunctional, my daughter is not dysfunctional at all, she's perfect," Anil Kapoor tells NDTV.
The batshit craziness in the family, however, belongs to Kamal Mehra, progenitor of the 'very dysfunctional son.' "I am completely bananas," Mr Kapoor says.
Priyanka Chopra insists that there's a little bit of the Mehras in all families. "It's a representation of every family and every family has its own ways of being dysfunctional. If everything seems fine and everyone's happy, the roses are shining and the sun's coming out then something's really wrong," she says.
"This film puts all the cliches of a family in front of you and makes you say 'Oh my god, I do this too. I'm also a cliche' - without telling you that you are," she explains.
The Mehras, as every family, might take a little getting used to but each individual Mehra admits to a little bit of dysfunctionality in their own off-screen families.
Priyanka's family has an argue-sulk-stonewall routine: "We all go into our rooms and slam the doors. Then 20 minutes later we come out and ignore each other and wait for the first person to crack. It's a pattern. It happened last night also."
Shefali, her husband Vipul Shah and two sons have a weekend tradition: "On the weekends when we go out for dinner, we invariably fight. Every, every weekend. We step into the car and all four of us fight. All four of us want to eat different cuisines and we all want to go in different directions. We know how it's going to start and we know how it's going to end but none of us try stopping it."
Ranveer Singh's folks just can't make up their mind about TV dinners: "The long-standing debate over whether there should be a television near the dinner table or not. It's so ridiculous now that it comes and goes by the week. One week there's a TV then when I come back from an outdoor shoot, suddenly the TV's not there. So we go back to not watching TV while eating. Then again it comes back. It's been happening for years. Every week, every month there's either a TV, sometimes there's no TV, there's my mummy-daddy's photo."
Anil Kapoor's family - wife Sunita, daughters Sonam and Rhea, and son Harsh - can't decide on vacation destinations: "We had planned to go on a holiday and we cannot decide. Someone wants to go to Gulmarg, someone wants to go to Bali, someone wants to go somewhere else and ultimately we end up not going together, everyone goes their separate ways. Harsh remains only in the bedroom."
Dil Dhadakne Do also stars Anushka Sharma, Farhan Akhtar and Rahul Bose, the dysfunctional levels of who we are unable to provide advance information on.
Watch: