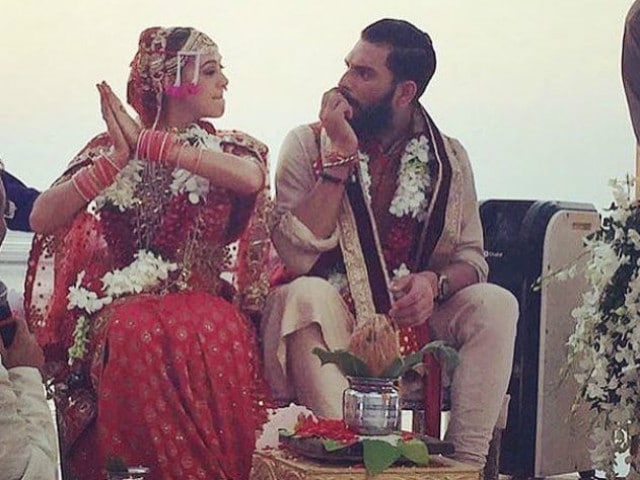 Cricketer Yuvraj Singh and actress-turned model Hazel Keech's wedding celebrations continue in New Delhi. A second sangeet ceremony was held on Monday, where Ashish Nehra almost dropped the groom while dancing. It was Virat Kohli who came to Yuvi's rescue and saved him from a great fall. The Yuvraj-Hazel festivities began a week ago. They married in Chandigarh at a gurudwara on November 30. Before that, there was a mehendi and sangeet number one. On December 2, there was a second wedding in Goa, according to Hindu rituals. Phew. And it isn't over yet. There's a reception planned in the capital on December 7.
Here's what went down at the sangeet in Delhi. Much dancing happened, apart from the Yuvi-Nehra-Virat moment.

Here, the Punjabi-munda is seen dancing at his baarat in Goa.


How cool is the groom @yuvisofficial chose to ride an ATV not horse! Love it #Baaraat #shaadi #Goa

On November 30, Yuvraj and Hazel got married in Chandigarh according to the Sikh traditions in a close-knit ceremony. On December 2, the couple had a destination wedding as per Hindu rituals in Goa. Actors Nora Fatehi, Angad Bedi, Ashish Chaudhary, his wife Samita Bangargi and cricketer Rohit Sharma and his wife Ritika Sajdeh were a part of the wedding.

The most-talked about guests were Virat Kohli and Anushka Sharma, who gave the bride and groom tough competition on the dance floor.

After the wedding, a reception was hosted by the couple, where Yuvraj was seen in a pale blue suit. Hazel, who is of British-Mauritian heritage, looked stunning in an embellished white ensemble.

Here are some of the pictures from their wedding in Chandigarh and Goa:

Ceremony 2 is over ! Time to relax @hazelkeechofficial


Hazel Keech is best known for her work in the Salman Khan film Bodyguard.