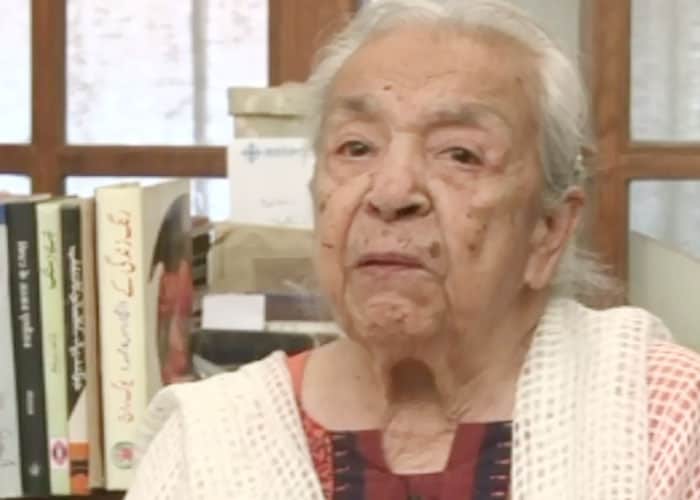 Zohra Sehgal died in a New Delhi hospital today. She celebrated her 102nd birthday in April.

In the unforgiving world of showbiz, where shelf lives are notoriously tiny, actress and dancer Zohra Sehgal's career flourished for several decades.

In the unforgiving world of showbiz, where shelf lives are notoriously tiny, actress and dancer Zohra Sehgal's career flourished for several decades.
Born Sahibzadi Zohra Begum Mumtaz-ullah Khan on April 27, 1912, Ms Sehgal was one of seven children and grew up near Dehradun. She was sent to Lahore's Queen Mary College and, after graduating, picked career over marriage.
And so began a story more remarkable than any that Bollywood could have scripted. (Also read: Zohra Sehgal's daughter slams government for refusing her ground-floor flat )
Young Zohra's uncle in Edinburgh arranged an apprenticeship under a British actor. Ms Sehgal made it from Lahore to Europe by car and boat, crossing Iran, Syria, Damascus and Egypt. In Europe, she was admitted to a school of ballet in Dresden despite never having danced before. She was the first Indian at the school. It was in Dresden, where she lived for the next three years, that she saw a performance by Uday Shankar's dance troupe and was promised a job with him.
The job materialised in 1935 after Mr Shankar sent her a telegram asking her to join his troupe on a tour of Japan. Over the next eight years, Zohra Sehgal performed across the world as one of the principal dancers of the troupe. In1940, she became a teacher at Uday Shankar's institute in Almora. Here, she met and fell in love with scientist and dancer Kameshwar Sehgal. Her parents objected but ultimately gave the couple their blessing and they were married in 1942. Mr and Mrs Sehgal had two children together.
In the uncertain days before the Partition, the Sehgals moved to Mumbai. In 1945, Zohra Sehgal joined the Prithvi Theatre and toured with them for 14 years. She made her film debut in 1946, appearing first in Dharti Ke Lal and then in Chetan Anand's Neecha Nagar which won top prize at Cannes.(Also read: Zohra Sehgal, Grand Old Lady of Indian Cinema, Dies at 102 )
She appeared in films like Dil Se, Bend it Like Beckham and Hum Dil De Chuke Sanam. She also appeared in British TV serials like The Jewel In The Crown. Zohra Sehgal last appeared on screen in 2007's Saawariya, aged 90 plus.
Among the many honours that Ms Sehgal won were three of India's four civilian awards - the Padma Shri, Padma Bhushan and Padma Vibhushan.
Zohra Sehgal died in a New Delhi hospital today. She celebrated her 102nd birthday in April.