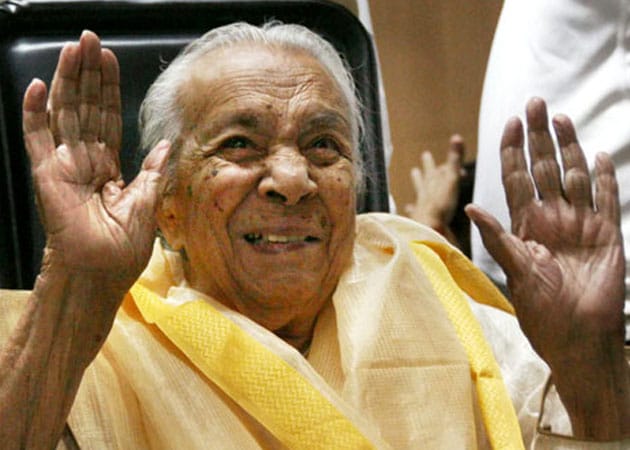 Zohra Sehgal, 101, had asked the culture ministry for help as she finds it hard to climb up to her current second-floor home.

Zohra Sehgal's daughter feels it is an insult to her and the case should be taken up as a "special category".

Reacting to a media report that the urban development ministry declined to give Zohra Sehgal a ground floor flat because she doesn't qualify under certain clauses, the veteran actress' daughter feels it is an insult to her and the case should be taken up as a "special category".
The 101-year-old actress lives with her daughter Kiran Sehgal, a renowned dancer, in a second floor house in south Delhi's Mandakini Enclave.
Zohra Sehgal is finding it difficult to climb stairs and move around due to ill health.
In 2013, Kiran had requested the culture ministry for the allotment of a ground floor government accommodation for them.
The ministry replied that her request has been forwarded to the urban development ministry. Later, news came that the ministry had declined this request.
"We have not received any official information from the ministry yet. We too got to know about this refusal through a newspaper report.
"It's extremely pathetic and doesn't speak very well of the government, given the fact that you have honoured Maa (Zohra) with the second highest civilian award, Padma Vibhushan," Kiran Sehgal told IANS.
"We have never asked the government to help us. When it got difficult to manage, only then we put across our request. It has become very tough for her, and with age it does get difficult," she said.
Kiran Sehgal also said she had first sent a request in 2011 to then chief minister Sheila Dikshit but nothing happened.
According to Kiran, there is a clause under which an artiste can get a government flat if he or she is below 60 years of age.
"I personally feel everyone needs help only when one crosses 60. So this clause should be completely removed. It's extremely silly and I strongly feel my mother's case should be taken as special," she said.
"She is living like a prisoner in her house. She can't move and when she has to move out, she has to climb stairs. She does that with great difficulty and almost cries," she added.
"For someone who has contributed so much to the world of entertainment, this treatment from the government is nothing but an insult," she added.