A Blockbuster Awakens: Star Wars Back on Big Screen 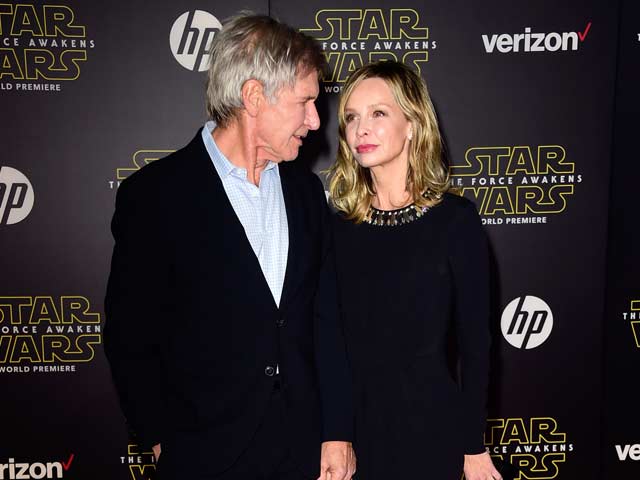 Harrison Ford and Calista Flockart at the premiere of Star Wars: The Force Awakens in California. Image courtesy: AFP

Fans cheered the highly anticipated Hollywood premiere of Star Wars: The Force Awakens with standing ovations, applause and screams of delight. "This is like the Academy Awards or something," said Harrison Ford, who plays Han Solo. Experts say that the movie, which could generate $400 million by the end of the year

Fans cheered the highly anticipated Hollywood premiere of Star Wars: The Force Awakens with standing ovations, applause and screams of delight as the space epic resumed under tight security. (Also Read: It's Funny. It's Bizarre: Harrison Ford on Playing Han Solo Again)
Police cordoned off the area around the famed Chinese Theatre on Hollywood Boulevard hosting the premiere along with other nearby theaters hosting some 5,000 guests, setting up metal detectors and deploying scores of officers and sniffer dogs.
As the stars of the latest installment of the epic walked the red carpet, fans -- some who had camped out for days in their Star Wars costumes -- went into a frenzy seeking autographs and pictures of the beloved movie characters.
"This is like the Academy Awards or something," Harrison Ford, who plays Han Solo, told AFP.
Jeff Bock, an analyst at box office tracker Exhibitor Relations, said 'this is probably the biggest opening in decades.'
Disney CEO Bob Iger hailed what 'could be the biggest premiere we have ever done.'
Ever since 1977, when Star Wars introduced the world to the Force, Jedi knights, Darth Vader, Wookiees and clever droids R2-D2 and C-3PO, the sci-fi saga has built a devoted global fan base that spans generations.
"I've been here since 3:00 am because I wanted to get a good spot," said James Salazar, 19, outside the Chinese Theatre. "I've been a fan all my life, it's my favorite movie and my dad's also," he added.
The premiere on Monday will be followed by a global rollout taking in a dozen countries beginning Wednesday before the film officially reaches American theaters on Friday.
The intergalactic tale of good versus evil, friendship, loyalty and love created a defining moment in the history of popular culture and launched one of the biggest movie franchises ever.
The original blockbuster turned Harrison Ford, Carrie Fisher and Mark Hamill -- who play its heroes Han Solo, Princess Leia and Luke Skywalker -- into stars overnight.
Much to the delight of legions of fans, the beloved actors return in the new installment -- which picks up 30 years after the events of 1983's Return of the Jedi.
But The Force Awakens also brings a host of fresh faces, among them British actors John Boyega and Daisy Ridley, who could be the breakout stars of the new film.
"You could say it's the themes, it's the Force, it's the lightsaber -- there's just something in this that touches people, and I don't think you can summarize that," said 23-year-old Ridley, who plays a scavenger called Rey.
John Boyega plays a character called Finn, portrayed in the trailer as a renegade Stormtrooper.
Other franchise newcomers include Oscar winner Lupita Nyong'o, who plays Maz Kanata, a motion-captured pirate character whose castle is packed with smugglers from across the galaxy.
Plot a closely kept secret
Director J J Abrams had the daunting task of taking the intergalactic tale created by George Lucas forward while trying to meet the high expectations of fans.
The last Star Wars film came out a decade ago -- the final chapter in a prequel trilogy that was less well-received than the original three films from 1977 to 1983.
So far, the plot of The Force Awakens -- Episode VII in the franchise -- remains a fiercely guarded mystery and those eager to read reviews must wait until Wednesday when a media embargo is lifted.
"Everyone knows we keep it secret for the right reasons," Mr Ridley said.
"Even the people that really want to know about it, they want to see it in the film."
The secrecy has sparked much speculation, with JJ Abrams promising it won't be a nostalgic trip down memory lane.
Is Darth Vader really dead? Will the hero of the first trilogy, Luke Skywalker, return? And could Rey, whose last name hasn't been revealed, be linked to the Skywalker dynasty?
What is already known for sure is that The Force Awakens cast counts far more women than previous renditions.
Besides Carrie Fisher, Daisy Ridley and Lupita Nyong'o, the film also features Gwendoline Christie, who made a name as the formidable warrior Brienne of Tarth in Game of Thrones and plays Captain Phasma, one of the film's villains.
"This is a female character we are not used to seeing on our screens because we relate to her due to the choices she makes and to character and she is wearing armor," thus not flashing flesh, Christie said.
"That to me feels like a modern concept and I hope it will encourage further diversity in filmmaking."
Anticipation for The Force Awakens has been building steadily for months, with Disney unleashing a well-orchestrated advertising campaign of merchandise tieups, trailers and interviews with cast members.
"It was fun, emotional. I felt like I was reliving my childhood," said Mike Caren, after watching the film.
Experts say that the movie, which could generate $400 million by the end of the year if it is well received, could help make 2015 the biggest year ever for the box office.
Products tied to the film could bring in up to $5 billion in revenue for Walt Disney Company, which paid $4 billion for Lucasfilm in 2012.