Jackie Chan might be the toughest guy to deal with on screen but the way he says 'namaste Salman,' in the Instagram video, will melt hearts 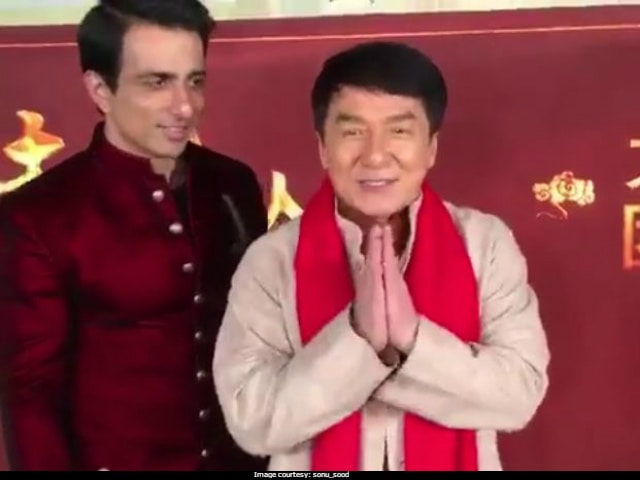 Salman Khan recently thanked Hong Kong-industry's biggest superstar Jackie Chan for casting a member of his Dabangg family in upcoming action-comedy Kung Fu Yoga. The film stars actor Sonu Sood, who featured as an antagonist called Chedi Singh in Salman Khan's 2010 film Dabangg. Delighted with Salman's tweet, Sonu Sood roped in Jackie Chan for a video, in which he sort of self-invites himself for a meeting with the 51-year-old superstar. "Thank you, Jackie Chan for giving this film to my Chedi Singh (Sonu Sood). This is the coolest," Salman Khan wrote in a tweet earlier this week, when he shared the trailer of Kung Fu Yoga.
Jackie Chan might be the toughest guy to deal with on screen but the way he says 'namaste Salman,' in the Instagram video, will melt hearts. "I'm going to see you in India with my brother," says the Rush Hour actor. "See you soon in India. Pandeji, hum aah rahe hai," wrote Sonu when he Instagrammed the video.
Watch the 'power-packed surprise' for Salman Khan here:


Bhai, @beingsalmankhan I have an unusual power packed surprise for you!! See you soon in India #Pandeji Hum aah rahe hai. @eyeofjackiechan

This is what Salman tweeted:


Thank you @EyeOfJackieChan for giving this film to my Chedi Singh @SonuSood . This is the coolest : https://t.co/Nl0qk742pl

Kung Fu Yoga also features actors Disha Patani and Amyra Dastur in significant roles. The action comedy stars Jackie Chan as a professor of archaeology while Disha's character is a student of history. Together, they venture on an expedition to discover the Magadha treasure in Tibet. In Kung Fu Yoga, Jackie Chan has been choreographed by Bollywood's celebrated choreographer Farah Khan and the actor can be seen performing typical Bollywood-style steps.
Kung Fu Yoga is part of the three-film agreement signed between India and China during Chinese President Xi Jinping's visit to India. Directed by Stanley Tong, Kung Fu Yoga has been extensively shot in Jaipur and Iceland.