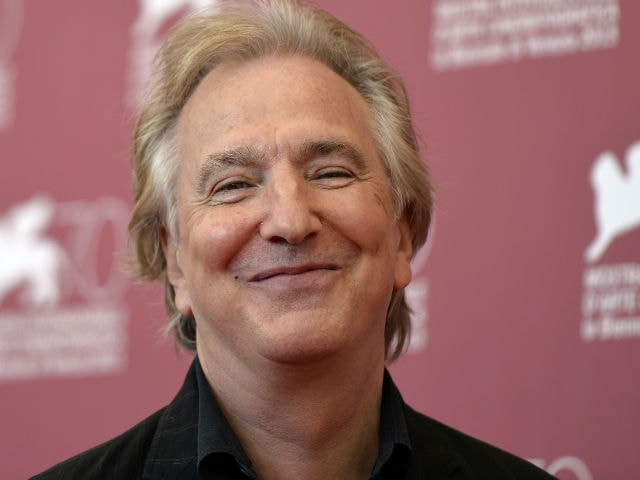 In contrast to Alan Rickman's often sneering and supercilious screen persona, fellow actors lamented the death of a warm, witty and generous friend. Actor Ian McKellan said Mr Rickman and Rima Horton were always top of his "dream-list dinner guests". "Alan would by turns be hilarious and indignant and gossipy and generous"

Veteran British actor Alan Rickman, a master of the menacing screen villain, has died at the age of 69 after suffering from cancer, his family said on Thursday.
The Golden Globe and BAFTA-winning film, television and theatre star possessed a rich, smooth voice and brooding delivery that helped make him a sex symbol as well as an archetypal "baddie" actor.
Mr Rickman started out in British theatre and shot to international fame in 1988 playing opposite Bruce Willis as the German terrorist mastermind Hans Gruber in Die Hard.
He did a memorable turn as the Sheriff of Nottingham in the 1991 blockbuster Robin Hood: Prince of Thieves and his performance earned him the best supporting actor gong at Britain's BAFTA film awards. (Also Read: Alan Rickman, Harry Potter's Severus Snape, Dies at 69)
"This will be a healthy reminder to me that subtlety isn't everything," he said, on receiving the award.
In a statement, the actor's family said he died "surrounded by family and friends".
In contrast to his often sneering and supercilious screen persona, fellow actors lamented the death of a warm, witty and generous friend.
"What I remember most in this moment of painful leave-taking is his humour, intelligence, wisdom and kindness," said actress Emma Thompson, who played alongside Mr Rickman in Christmas-themed romantic comedy movie Love Actually.
Hilarious, Gossipy and Generous
Actor Ian McKellan said Mr Rickman and his partner of 50 years Rima Horton were always top of his "dream-list dinner guests".
"Alan would by turns be hilarious and indignant and gossipy and generous," he said.
"Behind his starry insouciance and careless elegance, behind that mournful face, which was just as beautiful when wracked with mirth, there was a super-active spirit."
Mr Rickman won a Best Actor Award at the Golden Globes and the Emmys for the title role in the television film Rasputin: Dark Servant of Destiny (1996).
But he gained legions of younger fans with his portrayal of the largely malicious teacher Severus Snape in all eight Harry Potter films from 2001 to 2011.
Harry Potter's creator J K Rowling said she was "shocked and devastated" to hear of his death.
"He was a magnificent actor and a wonderful man... We have all lost a great talent."
Born in Acton, west London, on February 21, 1946, Alan Rickman won a scholarship to the Royal Academy of Dramatic Art at the relatively late age of 26.
In 1985 he played the original lead male role in the Royal Shakespeare Company's version of Les Liaisons Dangereuses. It transferred to Broadway, where he received a Tony Award nomination.
Playing the Vicomte de Valmont, "he created a scintillating, stylish danger which became a hallmark in a career as varied and distinguished as any actor would wish," said RSC artistic director Gregory Doran.
Two Films in Pipeline
He paid tribute to an "original" actor with "forensic intelligence, precision and brilliant comic timing".
Mr Rickman played the romantic leads in the British films Truly, Madly, Deeply (1991), and Sense and Sensibility (1994).
But it was his intimidating portrayal of villains that made his mark on Hollywood.
In 1995 he was chosen by Empire film magazine as the 34th sexiest star in film history.
Though he never won an Oscar, Mr Rickman did not view it as a snub. "Parts win prizes, not actors," he told US television network IFC in 2008.
He met Rima Horton, a local politician and economics lecturer, in 1965 and they married in a private ceremony in New York in 2012.
Mr Rickman's death comes just months ahead of the release of a new film called Eye in the Sky in which he stars alongside Helen Mirren and Aaron Paul.
The Alice in Wonderland sequel Alice Through the Looking Glass is also due for release later this year.