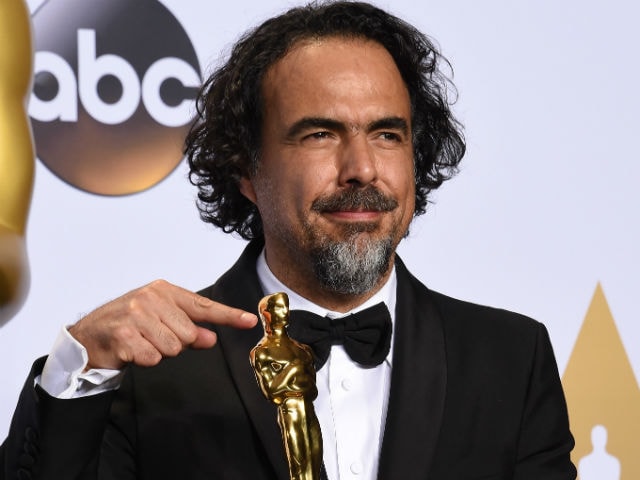 Alejandro Inarritu poses with his trophy at the Oscars. (Image courtesy: AFP)

Alejandro Gonzalez Inarritu soared into Hollywood lore when he picked up the Oscar for The Revenant, becoming the third filmmaker to win back-to-back Academy Awards for Best Director. But he describes himself as: "I think that I'm a musician before I am a filmmaker - a frustrated musician"

Alejandro Gonzalez Inarritu soared into Hollywood lore on Sunday, giving Mexico a best director triumph at the Oscars for a stunning third straight year.
The former radio DJ became just the third filmmaker to win back-to-back Academy Awards for Best Director for his epic story of vengeance and survival, The Revenant.
He won the Best Director and Best Picture Oscars last year for Birdman. His friend and countryman Alfonso Cuaron won the top director award for Gravity in 2014.
Only two other Hollywood legends won two straight best director Oscars: John Ford in 1941 and 1942 and Joseph Mankiewicz in 1950 and 1951. (Also Read - Oscars 2016: Complete List of Winners)
"I couldn't be more happy. Every film is like a song - you can't like one song more than the other," Mr Inarritu told reporters after his win.
"Storytelling is a way for us to confront emotions and possibilities and feel beautiful and horrible emotions. It's a way to control life, to have an oxygen capsule for life without suffering for real," he said. Mr Inarritu also joins an impressive club of directors who have two golden statuettes: Billy Wilder, Clint Eastwood, Steven Spielberg, Milos Forman, Oliver Stone and Ang Lee.
The Revenant is the result of five years of travel and research that Mr Inarritu dedicated to make the brutal biopic, shot under adverse weather conditions with Leonardo DiCaprio starring as a 19th century frontiersman who seeks revenge after being left for dead.
Government Critic
Mr Inarritu has had an enviable career. His six feature films have all earned some kind of nomination at the Oscars.
With Mr Cuaron and their friend Guillermo del Toro, the trio have been dubbed The Three Amigos, heading a golden generation of Mexican filmmakers who have scooped up the industry's most prestigious prizes in recent years.
Mr Inarritu has used his international fame to take the government of President Enrique Pena Nieto to task.
When he took the stage last year to accept the Oscar for Birdman, he urged Mexicans to "find and build the government that we deserve."
Two days later, he doubled-down on his criticism, saying that "the level of dissatisfaction, of injustice, of corruption, of impunity have reached intolerable levels" in his native land mired in a decade-long drug war.
Pena Nieto, who had congratulated Mr Inarritu for his Oscar glory, responded that his government was striving to improve the lives of the Mexican people.
This year, he tackled the thorny row over diversity that roiled the Oscars.
"There is a line in the film that says, 'They don't listen to you when they see the color of your skin'," he said.
"So what a great opportunity to our generation to really liberate ourselves from all prejudice and, you know, this way of thinking and make sure for once and forever that the color of skin becomes as irrelevant as the length of our hair."
Music Lover
While Mr Inarritu shot to fame with his 2000 Mexican drama Amores Perros, and earned his first Oscar nomination as Director for 2006's Babel starring Brad Pitt, the 52-year-old director came late to the movie world.
A music lover, the wild-haired director started working for WFM radio in the 1980s while he was still a communications student at Mexico City's Iberoamerican University.
But true to his adventurous spirit - he traveled the world as a cabin boy in a merchant vessel at the age of 19 - he took his chances, trading the microphone for a camera.
"I think that I'm a musician before I am a filmmaker - a frustrated musician," Mr Inarritu, a father of two who lost a third child shortly after birth, once said.
Mr Inarritu left WFM in the 1990s to make television advertisements and short films for his production firm, Z Films, while learning the craft from Polish-born theater director Ludwik Margules.
It was during that time that he met screenwriter Guillermo Arriaga, with whom he made Amores Perros - a raw drama in which three stories collide after a car crash in Mexico's sprawling capital.
Mr Inarritu debut feature earned him a big ovation at the Cannes film festival, where it won the Critics' Week prize in 2000.
On the back of the film's success, Mr Inarritu moved to Los Angeles, where he directed other somber dramas packed with Hollywood stars.
But Mr Arriaga and Mr Inarritu had a bitter break after Babel, with the screenwriter, who earned an Oscar nomination, complaining that his role in the film was underplayed.
During a visit to Mexico City in January, he said that after the grueling filming of The Revenant, he was ready to "crawl into a cave to hibernate like a bear" for six months.
"I cannot imagine that I will be making another movie any time soon," he said.