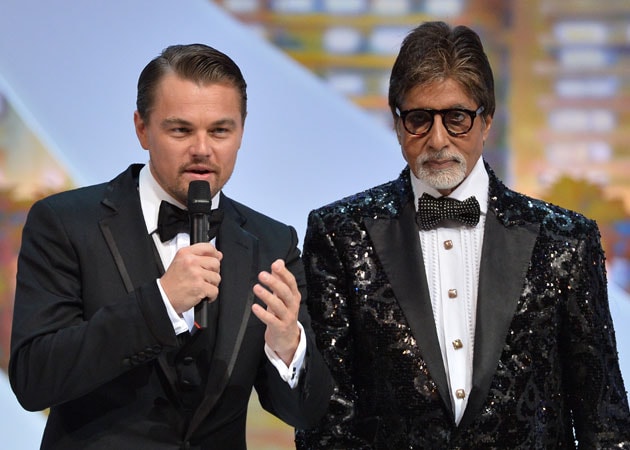 Amitabh Bachchan's belated conquest of Hollywood is now entirely complete. His performance in Baz Luhrmann's The Great Gatsby has been singled out for praise by American critics. And now, from co-star Leonardo DiCaprio, come compliments of the most generous sort.

Amitabh Bachchan's belated conquest of Hollywood is now entirely complete. Mr Bachchan, beloved in India for his personality as much as his talent, plays shady Jew Meyer Wolfsheim in Australian director Baz Luhrmann's adaptation of F Scott Fitzgerald's The Great Gatsby, a small but pivotal role. Already, his performance has been singled out for praise by American critics. And now, from co-star Leonardo DiCaprio, come compliments of the most generous sort.
Read - Cannes 2013: Amitabh Bachchan, Vidya Balan open Cannes with a Bollywood bang
Speaking to NDTV's Noopur Tiwari in Cannes, Hollywood star Leonardo said: "He couldn't be a more gentle, wonderful individual to work with. And astoundingly talented. To come and play Meyer Wolfsheim in this movie and embody that roughness and a mystery, everything that comes out of his mouth is filled with so much more and so much presence. And then you see the camera cut and he's the perfect gentleman, just a joy to be around and a wonderful collaborator. He's a magnificent actor and I was honoured to work with him."
Leo, who plays the central character of Jay Gatsby in the film, also said: The truth is I haven't watched a lot of Indian films in my life but we did talk about them at great length and we always had interesting stories to tell about how we started off as actors and what it was like for him. I can't say enough wonderful things about my experience working with him."
Read: Amitabh Bachchan, Leonardo DiCaprio declare Cannes Film Festival open
Mr Bachchan's other co-star Tobey Maguire, who plays observer and narrator Nick Carraway in The Great Gatsby, also gushed about his experience working with India's biggest star. It took him a while to "get over the feeling" that he was "in the presence of iconic royalty," Tobey told Noopur.
"It was really an honour working with him. He so great. He so thoughtful. And his presence, he's really kind of regal in a sense but also really down-to-earth and so modest. And a very talented actor too. It was kind of an interesting, surprising way to go for that part and I couldn't imagine anybody else doing it," Tobey said.
Read - Amitabh Bachchan: Red carpet is a daunting but wonderful experience
Meanwhile, America had a taste of stardom Bollywood-style at the New York premier of the film, which also stars actresses Carey Mulligan and Isla Fisher. Deafening cheers from the fans crowding the red carpet left the American press looking in vain for Leonardo DiCaprio. The cheers, louder than for any other star, were for Amitabh Bachchan.
Back home, India is thrilled at having to share Amitabh Bachchan with the world.
Watch: