Angelina Jolie And Kids Cook And Eat Bugs In Cambodia. Watch Video, If You Can 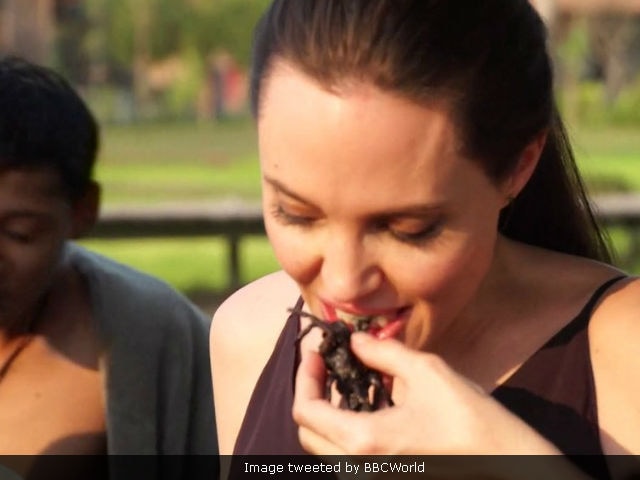 Actress Angelina Jolie, who is promoting her first film after filing for divorce from Brad Pitt last year, features in a video that might make you a little uncomfortable. The 41-year-old actress is in Cambodia with her children -Maddox, 15, Pax, 13, Zahara, 12, Shiloh, 10, and eight-year-old twins Knox and Vivienne - where they cooked creepy crawlies - crickets, scorpions and spiders - during an interview with BBC World News. Angelina said, "I think it's always been a part of the diet (in Cambodia), the bugs, but then I think there is a truth to the survival during the war of course when people were being starved they were able to survive on things like this and they did." Angelina Jolie is promoting First They Killed My Father, the new film she's directed based on a memoir of the Khmer Rouge regime of Cambodia. Her eldest son Maddox is Cambodian.
Angelina also revealed that she ate crickets when she first visited Cambodia, from where she adopted Maddox as a baby in 2002. "Crickets, you start with crickets and a beer and then you kind of move up to tarantulas," she said.
Watch Angelina and her children cook bugs for 'dinner':


"You want to share a spider?" - Angelina Jolie cooks bugs in Cambodia https://t.co/5mSi3VNErTpic.twitter.com/OZ12DjpyJD

Reactions from a fascinated Internet have been mixed.


angelina, blink twice if someone is forcing you to do this https://t.co/oGQPqIAF4m

Recently, Angelina Jolie also spoke about how she's dealing with the separation and custody battle with Brad Pitt, with whom she last featured in 2015 film By The Sea.
"We are focusing on the health of our family. We will be stronger when we come out of this because that's what we're determined to do as a family," Angeline said on Good Morning America, reports AFP. "We will always be a family. Always," she added.
(With inputs from AFP)