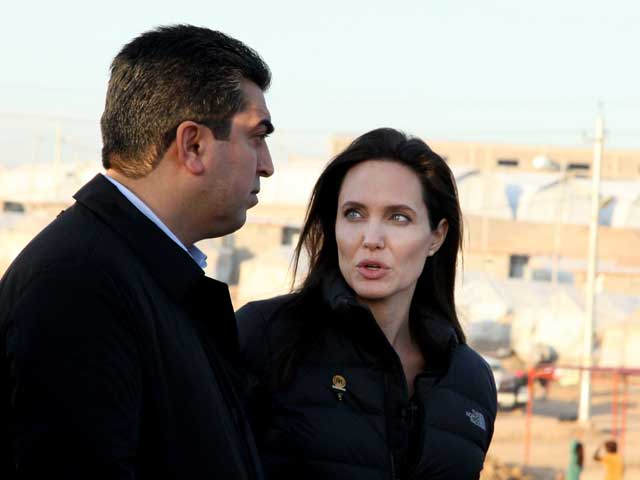 Angelina Jolie has been travelling around the world visiting war zones since 2001 (Image source: AP)

According to a new poll of 25,000 people, the mother-of-six and United Nations special envoy was most worthy of respect internationally, reports dailymail.co.uk.

Angelina, 39, last directed the critically acclaimed film Unbroken, which was about the Second World War, and has been travelling around the world visiting war zones since 2001.

In second place was 17-year-old Malala Yousafzai, who survived being shot by the Taliban and won this year's Nobel Peace Prize.

Hillary Clinton, the former US Secretary of State, rounded out the top three.

The poll was conducted across 23 countries, with each nation producing different results.

The British Queen was widely admired along with First Lady Michelle Obama, who came in fifth and surprisingly singer Celine Dion who took the sixth spot, ahead of Oprah Winfrey at seventh spot and Julia Roberts, who was the eighth most admired woman.

Burmese leader Aung San Suu Kyi came in at the ninth position, while German Chancellor Angela Merkel was the tenth most admired globally.

Close behind Ms Merkel were singers Taylor Swift and Beyonce Knowles at the 11th and 12th places.

Sonia Gandhi was on the 13th spot, just ahead of actress Jennifer Lawrence.

Duchess of Cambridge Kate Middleton came in 15th in the worldwide results.