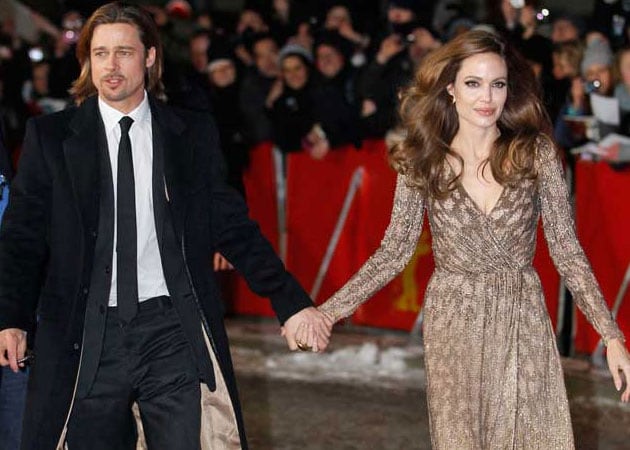 The actress's father Jon Voight has admitted he isn't privy to any of the couple's wedding plans and said he only spends time with their six children.

Angelina Jolie's father has revealed he has no idea when she will marry her fiance Brad Pitt.
The actress's father Jon Voight - who reconciled with her in 2010 after nearly a decade of estrangement - has admitted he isn't privy to any of the couple's wedding plans and said he only really spends time with their six children, Maddox, 11, Pax, eight, Zahara, seven, Shiloh, six, and four-year-old twins Knox and Vivienne.
He told EOnline.com: "Actually, I don't know. I'm not like that with them. You know, I've heard the rumours and so and so and what's going on. No, I'm not like that. I'm happy when I see them, we play with the children and that's it."
The 37-year-old The Tourist star is rumoured to have tied the knot with her 49-year-old long-term partner on Christmas Day (December 25, 2012) but they have yet to comment on the reports.
An assistant for the Hollywood couple collected their wedding rings for them from top Los Angeles jewellers Neil Lane at the end of November 2013.
Brad previously claimed he is in no rush to marry his fiance and is happy to wait until the time was right for them both, even though he popped the question back in April and has been with her for more than seven years.
He said: "We don't have a date yet. I don't know what's going to happen in two weeks never mind the New Year. We're such migratory workers that it'll be a matter of convenience location wise."
This would be Angelina's third marriage after previously being wed to British actor Jonny Lee Miller between 1996 and 1999 followed by musician-and-actor Billy Bob Thornton from 2000 to 2003.
Brad was married to Friends star Jennifer Aniston but he separated from her in 2005.
Meanwhile, 74-year-old 24 star Jon said he wouldn't be surprised if the couple has more children in the near future.
He said: "Well, you never know with those guys. They're a very surprising couple so you never know, but I think six is quite a lot."