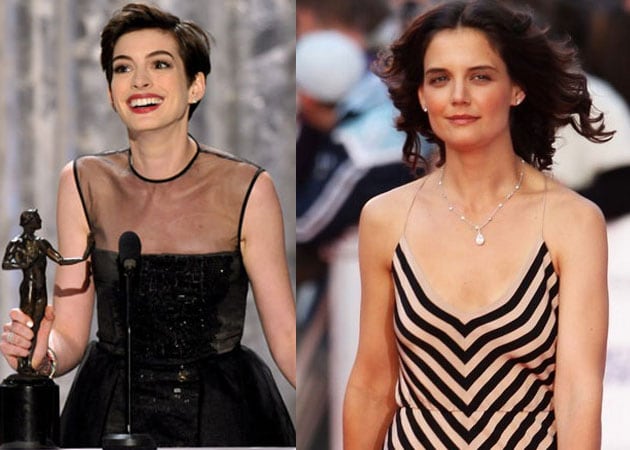 The feud between Anne Hathaway and Katie Holmes has allegedly become even more intense since Anne impersonated Katie on Saturday Night Live.

Anne Hathaway reportedly doesn't like Katie Holmes and thinks she relied on her marriage to Tom Cruise to further her career.

Anne Hathaway and Katie Holmes are allegedly bitter rivals.
The 29-year-old Les Miserables star reportedly doesn't like the 34-year-old Broadway star and thinks she relied on her marriage to Tom Cruise, who she split from last June after six years together, to further her career.
A source told the National Enquirer: "Anne and Katie are long-time rivals.
"Anne puts forth a very genial, friendly image, but she has a wicked competitive streak. She doesn't like Katie because they used to go up for similar roles.
"Anne always felt like Katie used her Hollywood connections through Tom to advance her career. And she constantly makes fun of Katie behind her back, mocking her former marriage and even her appearance.
"Simply put, there is no love lost between Anne and Katie. It all comes down to the fact that Anne doesn't take Katie seriously as an actress. And Katie's gotten Anne's message loud and clear."
Their feud has allegedly become even more intense since Anne impersonated Katie, who has a six-year-old daughter Suri with Tom, on Saturday Night Live recently during a skit interview with The Ellen DeGeneres Show, putting on a slightly vacant expression and mocking her demeanour.
She joked: "Well if you read US Weekly you'll know that Suri and I spend every waking minute at the zoo."
Both actresses starred in the Batman franchise. Katie appeared as Rachel Dawes in the first installment Batman Begins in 2005 but was replaced by Maggie Gyllenhaal in the second film The Dark Knight in 2008, while Anne appeared as Catwoman in the final installment of the series The Dark Knight Rises last year.