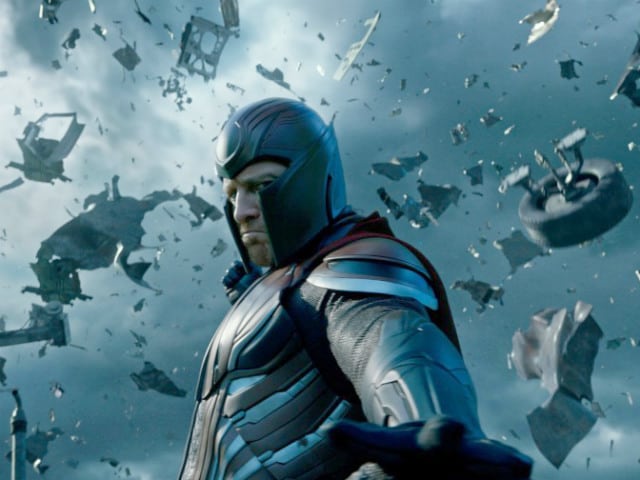 Where does X-Men: Apocalypse fit in among similar flicks this year? If early reviews are to be believed, it's not as controversial as Batman v Superman, but it doesn't measure up to Captain America: Civil War either. The reviews may be mixed, but the critical reception is more disappointing

There is a moment in the '80s-set film X-Men: Apocalypse when teenage mutants are exiting a screening of the then-new Star Wars release Return of the Jedi. One of them notes that the third film in any trilogy is "always the worst." The line registers like a direct dig at the widely derided X-Men: The Last Stand, the third film in the earlier iteration of the X-Men franchise.
Yet while Apocalypse director Bryan Singer might be meta-heckling Brett Ratner's 2006 movie, let's hope he's also aware enough to be self-deprecating there: According to critics, his own Apocalypse -- yes, the third film in this X-Men prequel trilogy -- is even worse.
The latest X-film, which arrives late Thursday, is being deemed so mediocre by critics, it currently ranks below even Ratner's The Last Stand, which has a score of 58 on Metacritic; Singer's Apocalypse now sits at a Metascore of 51.
So where does X-Men: Apocalypse fit in among similar flicks this year? If early reviews are to be believed, it's not as controversial as Batman v Superman, but it doesn't measure up to Captain America: Civil War either.
The reviews may be decidedly mixed, but the critical reception registers as more disappointing because it suffers by comparison, landing right on the heels of the mostly lauded Civil War. The reviews also bear particularly disheartening news when you consider that every prior superhero film directed and/or written by Singer had received a "positive" aggregate score on Metacritic.
Barring an 11th-hour surge in positive reviews, Apocalypse will be the worst-reviewed X-team film ever -- ahead of only the solo installment X-Men Origins: Wolverine (Metascore: 40), the 2009 movie that was so misguided, it stitched Deadpool's merc-quick lips together (thus silencing the very snark that helped make this year's Deadpool such a huge hit).
So just where does this film -- and Singer's former sure-handed conducting -- go off the rails?
A phalanx of critics say that the world-domination plot seems awfully tired in 2016, particularly because for the third time this year in a major superhero film, the crimefighters are pressed into battle against each other on a massive scale. (And for comparison's sake: B v S has a Metascore of 44, and Civil War a 75.)
"Both Captain America: Civil War and X-Men: Apocalypse are superhero extravaganzas with severe traffic control problems, but while the former keeps things flowing reasonably smoothly, the latter film ... resembles a bumper-car nightmare," writes the Hollywood Reporter, which adds: "Mostly it just feels like a bloated if ambitious attempt to shuffle as many mutants and specially gifted characters as possible into a story of a resurrected god ready to take over the world."
The "traffic-control problem" crops up again and again in Apocalypse reviews, some of which note that numerous superhero films now groan beneath this weight of ever-growing casts as a means to sate elevating expectations.
"Apocalypse feels like a confused, kitchen-sink mess with a half dozen too many characters, a villain (played by Oscar Isaac) who amounts to a big blue nothing, and a narrative that's so choppy and poorly cut together that it feels like you're watching a flipbook instead of a movie," writes Entertainment Weekly.
And Variety writes: Although the X-Men ensembles are usually large, there are simply too many characters for the action-heavy 'Apocalypse' to properly juggle." Movie Nation critic Roger Moore, in lambasting the film, finds structural issues doomed by formula: "The epic effects, titanic struggles timed out every 30 minutes or so and ever-growing, ever-evolving lineup of characters of Apocalypse ... underline the exhausted ingredients of the formula these movies all use. So many movies, so many mutants, with filmmakers straining to find something new to do with them, and watching them try too hard is wearying. They're joyless technical exercises, as predictable as a video game."
Slant magazine places the blame squarely at Singer's feet: "The issue with X-Men: Apocalypse is that Bryan Singer suggests so many possible directions to go in and still chooses the least interesting one."
And Time Out New York blasts the writing: "The script is just nonsense, comprised entirely of sarcastic asides, portentous gobbledygook ("The dawn of a new age will rise!" cries Isaac) and insider references that only the faithful will appreciate."
Outlets like IndieWire -- while lauding Isaac's palpably "powerful" villain -- long for more character depth: "If only these characters were allowed to be as complex as the ideas they fight for, Apocalypse could have represented a new beginning for superhero cinema." And RogerEbert.com, in its one-star review, finds that fault especially grievous: "The greatest sin of X-Men: Apocalypse by far is how terribly it wastes some of the greatest modern actors."
The Village Voice review is noteworthy in its uncommonly high praise: "This film nimbly mixes narrative exuberance and emotional depth, flamboyant displays of power with quietly terrifying exchanges. It zips along, combining the highs and lows of a real comic book - all the feeling, color, and wonder, even some of the dopiness - with gloriously cinematic storytelling."
And the Chicago Tribune puts the film within the context of the superhero year so far. If Civil War is "the good one" and B v S is "the bad one," then Apocalypse is "the OK one."
"I've seen worse this year," writes the Tribune's Michael Phillips. "And better."
(c) 2016, The Washington Post